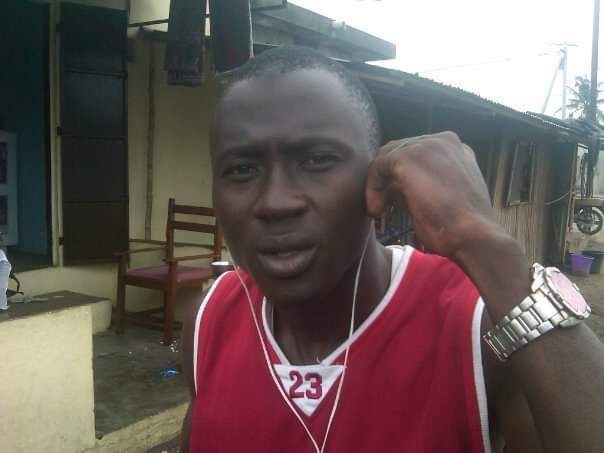 It was just like a war field, as the sound of gun enveloped the sky with the whole place covered with smoke emanated from the several gun shots. That moment became frightened for the whole residence of Era Road, Ijanikin, Ojo, Lagos, South-West Nigeria.   The unknown gunmen in military camouflage stormed the area in a commando way  with guns and other dangerous weapon to attack their victims. The day was indeed a very bad one.

Before the residents could comprehend the reason for such invasion, a building belonging to one Hakeem Olalekan Adegoke, located at No 7b Era Road, Ijanikin, Oto, Awori Lagos, been set on fire with terrible gun shot from the invaders and attackers went straight to the occupants. The attackers were in a very full action to waste every soul find in the building.

That was the situation of the family of the young man known as Adegoke Hakeem Olalekan when gun men suspected to be hire assassins stormed his residence on 25th April, 2018. They came to kill him and his family. This sad event as again proved that the country’s security is at low ebb; the security operatives are incapacitated to curtail the criminal acts in the country.

According to some of the residents who spoke to us when our reporter visited the area. Mrs Kuburat Ajao, said ‘ My brother, may God help us in this country, our security is very bad, I had never seen such a thing in my life. It was very early in the morning, we were just hearing gun shots from everywhere and these people in military uniforms were just shouting ‘where is Hakeem, we are going to kill you and every member of your family today. Today is your last day on earth.

Before we could know what is happening they have attacked Hakeem’s family house, set it on fire. It was a divine grace that made his  two children and  mother to escape, but the attackers went away with his two siblings whom we don’t known their whereabouts. As I’m speaking with you, nobody is safe again in this country, killing is every where, kidnapping has became order of the day’

Another resident, who did not want his name in print for fear of being attacked said ‘ We are all just preparing for the day’s work when we started hearing  gun shots, and the attackers were shouting  Hakeem’s name. We don’t know what transpired between them, they came to  kill him. Thank God, he was able to escape but the gunmen threatened to kill him anytime, any day they set their eyes on him in the country. It was alleged that the criminals were sent by one big man called Onome to terminate his life. I thank God for him that they missed their target, but they have kidnapped his two siblings. We don’t know where they have taken them to but we have informed the police. However, the police have not done anything to arrest those people,  I’m  suspecting foul play by our police because Onome is a very influential person. We don’t have trust in our security officer any longer. We can’t sleep with our both eyes closed, because only God know their next target. Please, help us tell the government to assist us in the security area,  killing has become the order of the day’.

All our efforts to get Hakeem proved abortive. We could not find him or any of his family members and his phone number has been switched off.

If you could recollect, some weeks ago, the entire family was wipped off by the dreaded cult members known as Baddo in Ikorodu area of Lagos State. Many people have also met their untimely death in a such pathetic way since the beginning of this year.  Look at what the Fulani herdsmen are doing to people, many lives have sent to untimely graves by these people, may God help us in Nigeria.