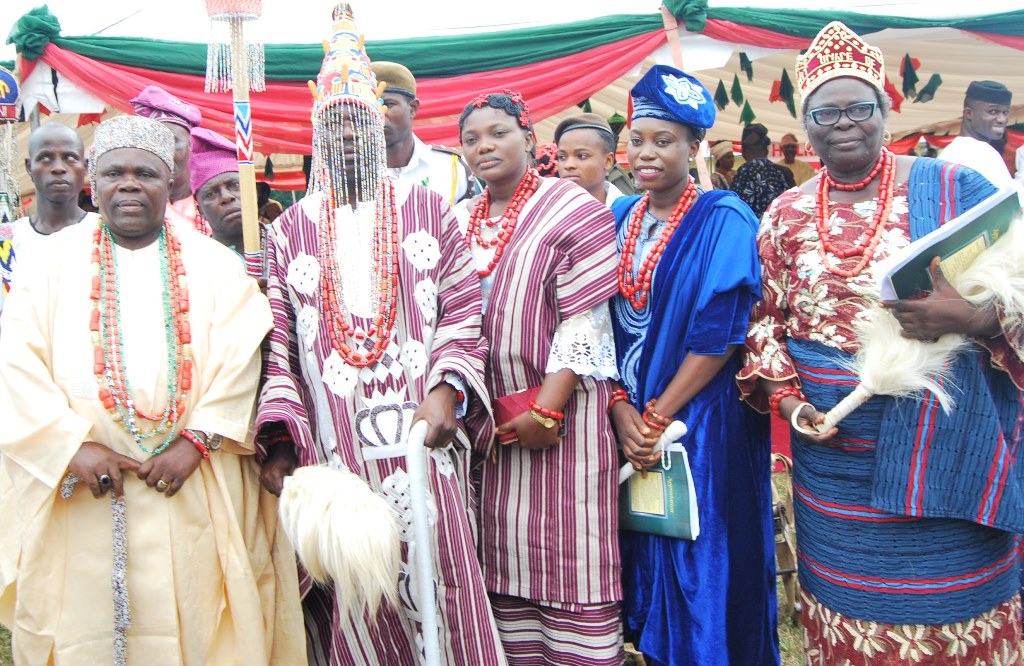 It was the dawn of a new era in Odo-Oro Ekiti on Saturday as the newly appointed monarch of the town, Oba Babatunde Adebayo Jemilehin, Aladesodedero 1, the Onise of Odo-Oro Ekiti, was given his Instrument of Appointment and Staff of Office by Governor John Kayode Fayemi, who was represented by his deputy, Chief Bisi Egbeyemi.

At the coronation ceremony held at the playing ground of Odo-Oro High School, gaily dressed sons and daughters of the ancient town trooped out in their thousands to witness the epoch making ceremony. Various traditional groups and age grades joined in the fanfare.

Speaking while presenting the Instrument of Appointment and Staff of Office to the new Onise, Chief Egbeyemi expressed confidence that with the legal background of the new monarch, “it would not be difficult  for the Oba to foster cooperation an unity among your people to elevate your community to an enviable status”.

The Ekiti State Deputy Governor also appealed to “the good people of Odo-Oro Ekiti  to allow the spirit of oneness and sincerity of purpose to reflect in your support and cooperation with the kabiyesi”, adding that such “is a basic requirement at this time when Odo-Oro Ekiti in dire need of accelerated development”.

As the custodian of culture and tradition of Odo-Oro people., the deputy governor counseled the Oba to strive to accommodate, endure, persevere tolerate and dutifully serve the and to also embrace all and sundry in the discharge of his duties.

Describing the event as “another milestone” the Permanent Secretary, Bureau of Chieftaincy Affairs, Ekiti State, Mr. Adeniyi Familoni, noted that “It is worthy of note that the entire process leading to the selection of the Kabiyesi-elect was done without rancour and his emergence was generally accepted by all sons and daughters of Odo-Oro Ekiti”, Familoni enthused.

In her remarks at the ceremony, the Executive Chairman, Ikole Local Government Area, Princess Abiola Olukayode, who also hails from the community, expressed joy that the selection process “produced a unanimously and generally acceptable candidate in Prince Babatunde Adebayo Ojo Jemilehin as the sole candidate and was confirmed by the kingmakers”. She appealed to the people to join hands with the new Oba to ensure a peaceful and progressive reign.

Welcoming guests to the ceremony, Chief Timothy Foluso Oluwagbemi, the Aro of Idofin and Chairman, Oba’s Coronation Planning Committee, thanked all those who contributed one way or the other to make the ceremony a huge success.

In his acceptance speech, Oba Aladesodedero 1 said that he was “humbled and overwhelmed by the show of affection, love and goodwill of the people of Odo-Oro Ekiti since my selection process started; up to my installation on October 14 and up till today.

“The selection process was unprecedentedly peaceful without any rancour because of the understanding of my brothers princes. The maturity o the entire Ilise and Niniosukarun Ruling House can never go unnoticed. The way we all accepted the outcome of the selection process without allowing the unpleasant history of the past to repeat itself shows that a new lease of life and bright light have come to stay in Odo-Oro Ekiti and in the ruling house”, the monarch noted.

The Onise of Odo-Oro Ekiti stool, it would be recalled, became vacant on August 20, 2018 when the then Onise, Oba Joseph Oyegbadebo, Ogunsakin Olowoselu 1, romAkowojobiokikun Ruling House joined his ancestors.