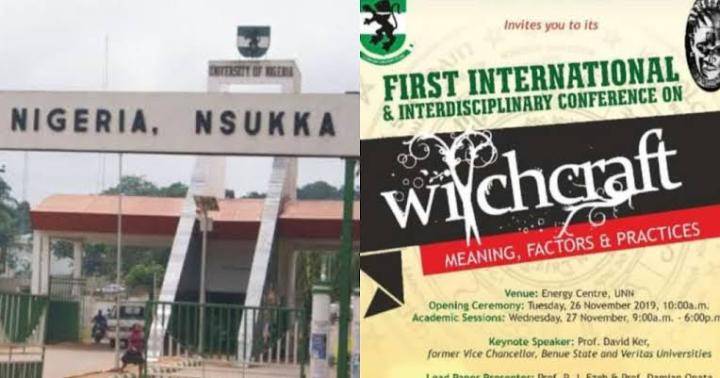 The opposition by some Christian groups to the proposed international witchcraft conference in Enugu this week is the height of intolerance and hate by the Christians as against the teachings of their Lord, Jesus Christ, who recommends love for all and hatred for none. Matthew 5: 44.

The Christian Association of Nigeria, CAN has warned the University of Nigeria, Nsukka, UNN, against going ahead with the planned witchcraft conference. In a statement issued by CAN Chairman in the South-East, Bishop Goddy Okafor, CAN demanded that the programme be called off immediately. “I call on all Heads of Blocks, State Chairmen and other Stakeholders of Christian Association of Nigeria South-East Zone to take up an aggressive prayers against the planned convention of Witches and Wizards slated to hold on November 26 at UNN. I hereby direct, all Christian Churches in South East of Nigerian to take up lamentation and pray against this evil movement in all our churches. I also call upon all Christian Campus Fellowship Groups and other Christian Students’ Associations to join in this effort and stand up for JESUS CHRIST OUR LORD against this evil development in South East of NIGERIA.” Bishop Dr. Goddy Okafor stated in his statement.

Similarly, the Secretary of the Christian Association of Nigeria, CAN, in the 17 Southern States, Apostle Joseph Ajujungwa warned the organizers to shelve the conference. “We the Christian community rejects in its entirety this attempt to hand over the UNN to the devil. This kind of thing cannot happen without some spiritual implications and effect and this is why we are saying ‘No’ to it. I join in calling on all Christians to hold fervent prayers in order to avert this looming danger. This is nothing but initiation through the back-door, and everything must be done to stop it. We urge the authorities of the UNN to avert the wrath of God by calling this conference off. It will not be of any advantage to the people but will end up in bringing calamity,” Ajujungwa said.

The Pentecostal Fellowship of Nigeria (PFN) also kicked against the proposed conference. The Christian body said it would stop at nothing to frustrate the event, describing it as a subtle way of handing Enugu State over to the kingdom of darkness. This was contained in a statement issued by the PFN Chairman in Enugu State, Bishop Godwin Madu, who declared that they would not sit by and watch some people hand the State over to witches.

Querying the conveners” choice of Enugu State, he said “we cannot fold our hands and watch our future dragged into what will not give God glory. To this end, the Church in Enugu has declared 2 days prayer of warfare. We must not allow this at a time like this, as we have had enough of ungodly activities in the country already. The Church should pray against those sponsoring evil in the State. Enugu State is in the hands of God and for that reason, we will not hand it over to witches. So, all Christians should without delay call on the God of Abraham, Isaac, Jacob and the awesome God of David to fight for his name.”

The Campus Christian fellowships are also displaying their opposition to the conference. They have held several possessions on the campus of UNN, distributing fliers and handbills condemning the planned conference.

Professor Egodi Uchendu is the Director of the B.I.C Ijomah Centre for Policy Studies and Research and a professor of history; she is one of the organizers of the conference. She told reporters that the protest and campaign by the Christian Association of Nigeria and Christian students in the University of Nigeria (UNN), Nsukka will not deter them from holding the academic conference.

“Freedom of speech is a fundamental human right. CAN and others are free to express their opinions just like we have the freedom to have an academic conference on witchcraft. I’m delighted that the conference is generating the debate it should across the nation. Nigerians should look critically into the subject of the conference and identify how it’s impeding our national existence and personal experience”,   She said.

The Bible in Hosea Chapter 4 verse 6 stated that; people are destroyed for lack of knowledge. It very sad that the leaders of Christian Association lacks full knowledge about the conference and were also in hurry to demonstrate their foolishness in the open by coming into the media to kick against  an academic exercise, which has no spiritual undertone .

The Witchcraft Conference being planned in Enugu is a purely academic activity. It is not the meeting of witches and wizards as being rumored by the uninformed Christian leaders in Enugu state.

The conference which has the theme Witchcraft; Meaning , Factor and Practices will have as key note speaker , a former Vice Chancellor of Benue State and Veritas  Universities, Professor David Ker and the Lead paper presenters are Professor PJ Ezeh and Professor Domian Opata. The conference will be the first international and interdisciplinary conference on witchcraft and even students who should be anxious to learn are also kicking against knowledge. That is a shame!

The Christians are behaving exactly the way their slave masters wanted them to behave by just believe without questioning (Trust and Obey), to keep them as a good slave and due to their laziness which has prevented them from quarrying the Bible as presented to them. These lazy Christians are disrupting a lawful gathering for intellectual discuss, in the name of God of Abraham, Isaac and Jacob, whom they have no relation with.

Little wonder, our nation is like this. So many worship centers, too much ungodliness, so many universities, many illiterates. “The heart of him who has understanding seeks knowledge, but the mouths of fools feed on folly” (Proverb 14:15).

Think about these things; No God will punish you for thinking and asking questions