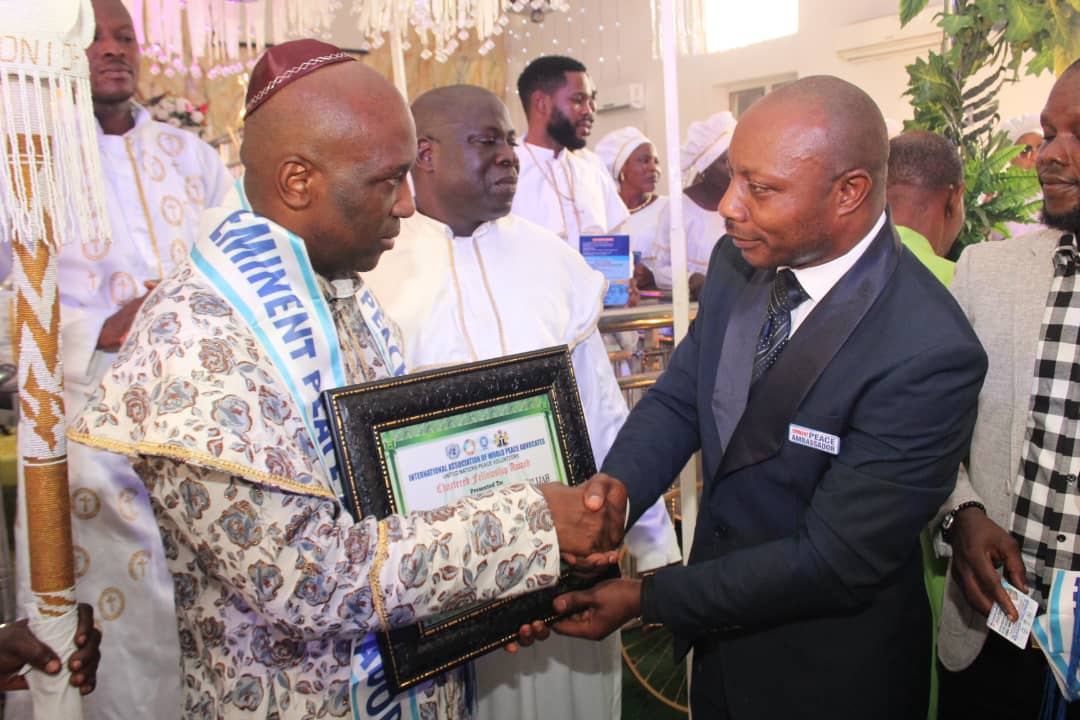 It was indeed a glorious time to reap the rewards of philanthropic gestures and humanitarian honor as The United Nations honoured top Nigerian prophet, Primate Elijah Babatunde Ayodele with its ‘Eminent Ambassador of Peace’ award.

In a ceremony held at Ayodele’s INRI church in Lagos on Sunday, 24th of November 2019, the UN, duly represented by Ambassador Chinedu Anthony, presented the award to the cleric ‘for his relentless contributions to the society and global humanitarian services and, above all, for being a man of peace.

According to Ambassador Chinedu Anthony, Eminent Peace Ambassador Award was bestowed on primate Ayodele Elijah because they have heard about his philanthropic gestures for so long and have also come to verify if this man of God deserved it.
He noted that when he was recommended for United Nations, they took their time to research if truly he peaches peace and unity in Nigeria.

He however said a lot of benefits are attached to this award to mention but few he will be preaching peace to the world among other prominent pastors, prophet, popes anytime the United Nations are called upon to give speech on peace about religion.
The event which also served as the 2019 harvest of the church also witnessed donations for the widows,  orphans and the sick.

Ambassador Primate Ayodele in his words said to Yoruba nation will arise during the time of Ooni of ife. “Oduduwa republic will come to stay”. he prophesied.

While expressing happiness on the presentation of the award, primate Ayodele noted this is another challenge for him to do more and contribute to the growth of the nation, he said,  “if i  am spending 1thousand naira for the needy, it has to be increased to 5 thousand naira now. I pray God should give me  strength to to carry out this task” Ayodele added.

Vice Chairman of Isolo Local Government, Bayo Oladokun, donates a sizeable amount of money to the church of God on behalf of KI, Pasunma, MC Olumo and his humble self.
He also promised to sponsor one person to Jerusalem next year, and promised on behalf of his boss Alhaji Wasiu Ayinde KI to sponsored another person to Mecca.
He also promised to assist the choir department of the Church in either cash or acquisition of instruments.
Prayers were offered to the nation, food materials and other financial assistance were rendered to hundreds of people who thronged I to the premises of the Church.