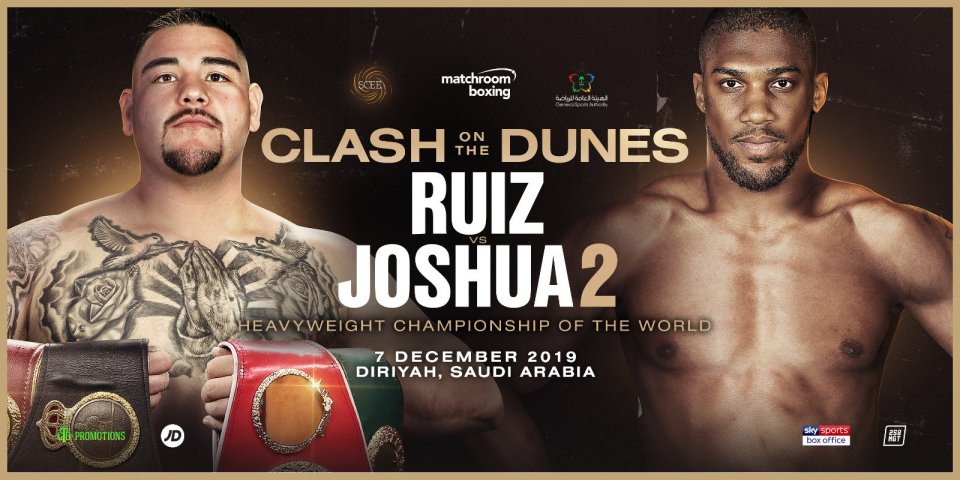 Anthony Joshua enters the ring with Andy Ruiz this weekend as the British boxer looks to reclaim his WBO, WBA (Super), IBF and IBO heavyweight titles.The world was left stunned the last time round as the Mexican born fighter overwhelmed Joshua to knock him down twice in the third round and then twice in the seventh round.

AJ had no response to the barrage of attacks leading to an eventual seventh round stoppage victory and his first career loss on his US debut in a fight designed to gain the boxer exposure to the American audience.Sportsmail will provide you all you need to know for Joshua vs Ruiz 2 including time, date, channel and location plus profiles, records, ticket availability and latest odds.Anthony Joshua first career loss was to Andy RuizAnthony Joshua first career loss was to Andy RuizAndy Ruiz claiming all four Anthony Joshua’s beltsAndy Ruiz claiming all four Anthony Joshua’s beltsWhen is it?The rematch between Anthony Joshua and Andy Ruiz Jr will be on Saturday, December 7. What time is it? UK fight timeThe Joshua vs Ruiz rematch is expected to take place at 10-10:30pm GMT.US fight time American viewers can expect to catch Joshua vs Ruiz Jr around 5-5:30pm ET.How to watch Joshua vs Ruiz? UK viewers were able to catch the action live on Sky Sports Box Office for £24.99.Whilst US viewers will be able to watch Joshua vs Ruiz Jr live on DAZN streaming service from $19.99 per month or save 58% with annual subscription at $99.99.Where is it happening? It was confirmed Anthony Joshua vs Andy Ruiz rematch would take place at Diriyah, Saudi Arabia.New York venue and Cardiff’s Principality Stadium were both contenders for the rematch with Joshua keen for the fight to take place in the UK shattered after Dillian Whyte’s failed drug test gave Ruiz cold feet.Matchroom Boxing✔@MatchroomBoxing🗣️ “The Arena and site are utterly breathtaking!” – @EddieHearn 🏟️#RuizJoshua2 #ClashOnTheDunesRead: Diriyah Arena ready for actionwww.matchroomboxing.com2285:07 PM – Nov 25, 2019Twitter Ads info and privacy87 people are talking about thisSaudi Arabian sports authorities then came with an reported offer of $100million (£83million) for the match to be held there which saw off the competition.Diriyah is a small town on the outskirts of Saudi Arabia’s capital Riyadh and was the first Saudi state to be established in 1744.Eddie Hearn during a press conference on Monday, August 12 said the bout would take place in a newly built open air stadium and expects 12,000 to 16,000 fans to attend.How do I get tickets?Tickets for Joshua vs Ruiz 2 are available from £217 via the Matchroom Boxing site. Joshua vs Ruiz profile and records Undercard updatesAnthony Joshua vs Andy Ruiz Jr odds Winner: *Odds courtesy of Oddschecker