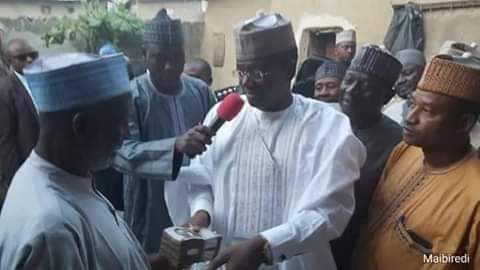 One of the cardinal principles of Leadership is empathy and sympathy to the poor. The essence of public treasury is to pool a commonwealth where the society can witness even distribution of resources for the maximum benefit of all.

It is equally a virtue for a leader to have the personal feelings and concern to the plights of the weak in the society. History is full of lessons. For example, the great “daulat-al-Islamiyya” did not thrive because of the might of its leaders, but due their empathy . It is reported that Umar, the third Caliph of Islamic Empire used to go round the town in the night listening and watching so that he identifies the weak and supports them.

Against this backdrop, His Excellency, Governor Bello Muhammad, not oblivious of the plight of the weak, began to identify the extremely weak and needy in the society for direct support. One may quickly say the Governor is already doing well in the area of poverty alleviation.

Yes, he is of course, doing well in the area of poverty alleviation because not a single state in Nigeria probably has a programme of direct grant of N20,000 to 1800 Women monthly to create a trade or boost an existing trade. Not many states have a social intervention programme which kick-started with a whopping figure of over 8,000 Youth with a monthly stipend of N10,000 to N50,000.

Despite these initiatives, the Governor this week began a very unique initiative where the poor among the poor are identified for him to personally visit them at home and directly impact on their personal lives. Beneficiaries of this, executive visit are Malama Saudatu Bello, Malam Bello Musa and Malam Audu, all in the suburbs of Gusau metropolis

Malam Bello’s case was interesting as he seized the opportunity to complain to the Governor when the latter came visiting in his house, that he was marrying out five girls in his household and has no means of doing it. Instantly, the Governor took up the fatherly responsibility of marrying out these children. Bello blurted into tears for this unexpected offer.

More interesting is the case of Malama Saudatu. She was in the house treating the sparsely scattered wheat being treated, probably for sale when the Governor came calling. She received him with both arms opened. She began to shower a rain of prayers upon His Excellency even before he offered her a handsome cash donation to boost her paltry wheat trade.

As for Malam Audu, he didn’t allow the Governor to leave his House until he called everyone in the Household to come and greet as well as appreciate His Excellency.

Matawalle seems to be saying, aloud, that as a Governor, it is good to deal with a Cabinet and civil servants to address the problems of the society. But it is even more spicy in leadership to personally deal with the weak and address their immediate worries and needs in a simplistic and humane manner. This is the new vision of Matawalle which, unfortunately , seems to be alien to modern leaders of our age.

Post Views: 276
Cool to share to any social media. Click preferred icon to sharers
Tags: MATAWALLE GOES ROUND TOUCHING LIVES OF THE POOR. - By Zailani Bappa