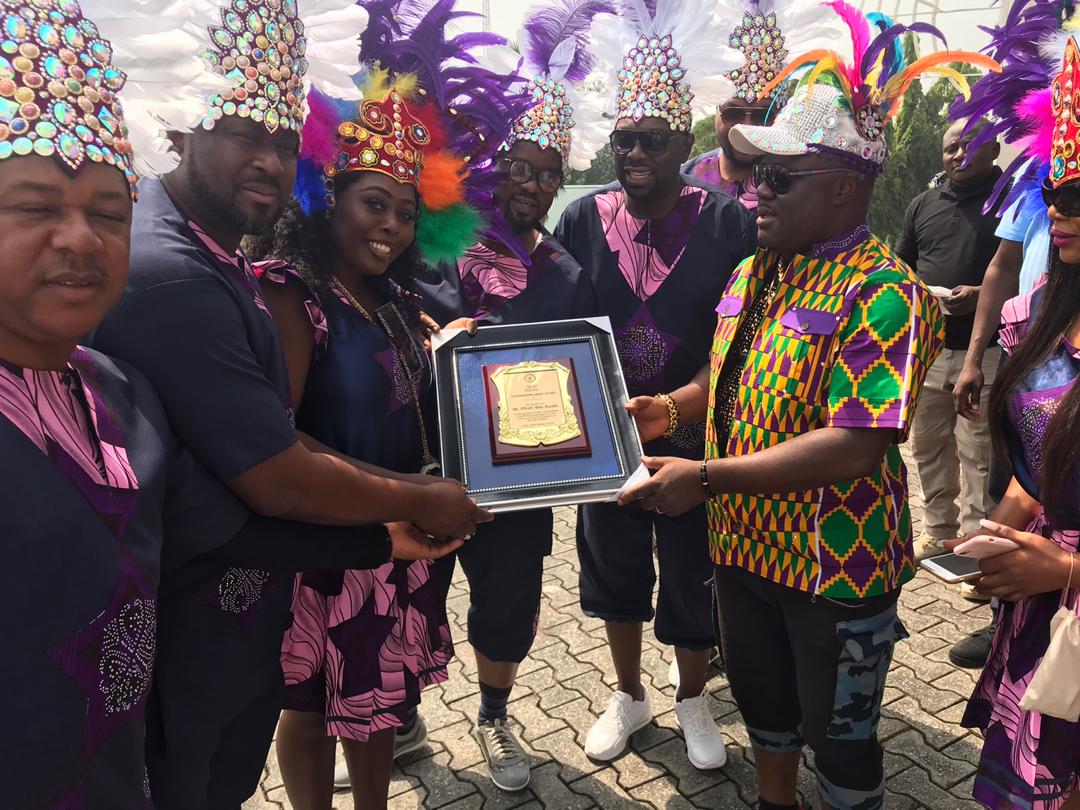 Top Nollywood Stars joined the organizers of the Abuja International Film Festival (AIFF)  to honor and the Executive Governor of of Cross River State Sir Prof Ben Ayade with the AIFF Special Recognition Award and Patron of the international acclaimed film festival festival.

The Abuja International Film Festival is the longest running film festival in Anglophone West Africa. The festival aims to celebrate outstanding work in video film in Nigeria and promote growth in the film industry in particular and the creative industry in general and also celebrate Nigerians who contribute to the development of the Creative Industry and this where the Governors has been recognised for his love for the arts.

According to the Festival Director, Mrs Temitope Duker  before the presentation, she emphasized that Sen. Prof. (Sir) Benedict Ayade was selected for the Award based on his strides in developing the creative economy in the state which includes film, music, literary arts amongst others. She also harped on his believe in industrialization and the meaningful strides

She also commended the Governor for sustaining the Calabar Carnival and Festival which has had a ripple effect on the tourism landscape of the State.  In her closing remark she mentioned governors believe in the Spirit of Enterprise which she harped has been a core attribute of Nollywood.

Also speaking during the presentation, the Festival Project Director Mr Segun Arinze thank the Governor for hosting and accepting to receive the award during the tight calabar carnival. He promised the festival will continue to uphold its ideals of the carnival theme which is HUMANITY.

In accepting the award, Hi Excellency the Executive Governor of the state expressed his appreciation to the organisers for considering him for the award.  He mentioned that he has been supporting the film industry even before he became a governor and he will continue to do so in any opportunity he has to support. He further mentioned that he believes in the industry and young people’ and only earlier in the year he had funded a film which was his way of supporting the growth of the Nigerian movie industry.

He however advised the Nollywood Stars present that they should not loose touch with the theme of the carnival this year which he is passionate about and will like to see a major film production on the theme HUMANITY made in 2020.  He further reiterated his support for the industry by promising to fund the production of 6 films in 2020.

In his closing remark, he commended the organizers of the Abuja International Film Festival for sustaining the Film festival for 17 years and made a donation of N5million Naira to the festival.

It will be recalled that the award was announced on 25th of October 2019 during the 16th edition of the festival.

Abuja International Film Festival is the longest running film festival in Anglophone West Africa. The festival aims to celebrate outstanding work in video film in Nigeria and promote growth in the film industry in particular and the creative industry in general.

Sen. Prof. Sir Benedict Ayade is presently serving his second term as Executive Governor of Cross River State having won his reelection massively in the 2019 gubernatorial election in the state. Ayade is a Professor of Environmental Sciences and recently returned to the university for his Master’s degree in Law.

Governor Ayade has supported the development of the creative economy in Cross River State during his term and recently rewarded outstanding creative industry players in the state. These are winners of the Linda Ayade Literary  Art and Afi Ekong Visual Art Competitions, who got one thousand pounds prize money each.

He also supported and invested in the production of several nollywood films within the state. His contribution to the creative economy is not limited to only film but the music industry is also inclusive.

Some of Sen. Ayade’s industrialization projects include the Cross River Garment Factory, the Rice Seeds and Seedlings Factory, the ultra modern Vitaminized Rice Mill, the Cocoa Processing Factory, the Frozen Chicken Plant, the Toothpicks Factory, the Feedmill and the Pharmaceutical Company to mention a few.

In the area of tourism, the governor has brought innovation to the Carnival Calabar and Festivals with the introduction of the international carnival and the bikers carnival. He also introduced the exotic cars show, the Miss Africa pageant and the latest, the Black Africa Music Festival.

The contribution of Sir Prof Benedict Ayade would be incomplete if mentioned and commendation is not made of his love for developing young entrepreneurs through his spirit of Enterprise initiative which is gradually changing the business narrative of the state. .