His real name is Isiaka Abiodun Akinpelu. But everybody calls him Mayor. It is not his nickname, but a name he was given when he was young. The big news is that Mayor Akinpelu, the Publisher of Global Excellence will be 60 in the next few weeks but he has postponed all celebrations to June because of the Coronavirus epidemic. And because of the Ramadan Season that will begin in a few weeks, he feels moving the celebration forward will make a lot of sense.

He has every cause to celebrate. He has had a distinguished media career spanning about 36 years. This has seen him working at The Guardian, Guardian Express, Prime People, and Victange People, after which he co-founded FAME and left to set up Global Excellence of which he is the founder & publisher. He is not just a leading or veteran journalist, he is passionate about what he does. It is the passion that he put into his craft that stod him out in the industry where he is regarded as a guru of celebrity reporting. He has carved out a niche for himself as a leading celebrity journalist cum Editor. Over the years all the celebrities who have encountered him have come to respect him for his exclusives. Because he was covering celebrities, in the main, he adopted the art of dressing well. At some point, he wore only white and always looks well-groomed.

He is also imbued with an analytical prowess that is 2nd to none. That is why he has become a valuable member of the popular TV programme Journalist Hangout where he often dazzles watchers with his very penetrating and incisive analyses of people and issues. How did Mayor Akinpelu become a Journalist? Did he study Journalism in school? And what has been his staying power? These and many more were the questions City People threw at him last week when he granted his 60th birthday interview. When he was young did he decide that he was going to be a Journalist when he grows up?

“No, no, no, not really,” was his curt answer. “When I was young, I wanted to be a Lawyer. I have always admired lawyers. I think it is a very good and notable profession so I wanted to be a Lawyer when I applied to the University of Lagos I applied for Law as my 1st choice and History as my 2nd Choice. The cut-off point for Law at the University of Lagos is quite high. So, I was not admitted for Law. So, I was admitted for my 2nd choice, which was History. I convinced myself that after my History course I would go to read Law.

But after my 1st degree, I did my Youth Service in Maiduguri. That is where I did the interview for the Federal Civil Service. So when I was employed and found myself at Maximum Security Prison Kirikiri as a social welfare officer. That time Fela was imprisoned, that was the time Nduka Irabor & Tunde Thompson, the 2 Journalists from The Guardian were in prison. I was excited, because I am a Fela fan, and I used to be a die-hard fan of Fela. From there, I became quite close to Nduka Irabor. I wrote some articles for them concerning Orkars Coup. I used a pen name then. After that, I started writing sports because I am also a football fan and I was very close to Stationery Stores at that time. Stationery Stores was a very popular club at that time. So, I used to write stories about Stationery Stores for the Guardian Express, then. Nduka was now moved from being the News Editor of the Guardian Express, which was the leading evening paper at that time. It was later that Nduka asked me if I wanted to join The Guardian Express I said Yes and I resigned. I joined The Guardian Express. From there I moved to Prime People, to Vintage People, then FAME. That is how I forgot about becoming a Lawyer and I concentrated on becoming a Journalist.

How does he see the changes Journalism has witnessed over the years? “It has been a welcome development. In the olden days, Nigerian freedom fighters used the Media to fight for Independence. Most people who fought for Independence were Journalists. Journalism has always occupied a pride of place in Nigeria. So, when I became a Journalist, Guardian then was undoubtedly the flagship of the Nigerian Press. I got a lot of good training at the Guardian Express because we had to cover a lot like Crime, Sports, Judiciary.

Giraffe people came along and others followed. Right now social media has taken over.” Does he think Journalism will die? “No. Journalism won’t die. Yes. Social media has affected Journalism but Journalism will not die. But we have to adapt to the changes. I remember that when Radio was discovered, people felt Print Journalism will die. That was what everybody thought Print Journalism will doe. It did not die. Print Journalism survived. Now there is Internet, I still believe that we will survive. It’s just that it has affected magazines and periodicals more than daily newspapers because now, people want their news on the go. They don’t want to wait a week to get information. So, you have to rejig. You have to find a way of still linking up with them on a daily basis for them to be able to get their news. A lot of magazines are now Online, all over the world, because of the Time factor. People want their news now. And then the competition is more because now, almost everybody is a Citizen Journalist now because, with your phone, you can take pictures. You can post. You can share your own ideas. And anybody can become a “Journalist” in quote. But I think we would still survive it, it is a passing phase. It is just that practitioners should know that the Internet has changed the game and we have to play it like that. The platform now is Online. That is the reality 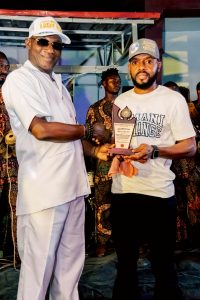