Primate Elijah Ayodele of Inri Evangelical Spiritual Church, Isolo, Lagos has said that Companies And Allied Matters Act (CAMA), which was recently signed by President Muhammadu Buhari was a joke and that it is dead on arrival.Primate Elijah Ayodele, notable for his accurate predictions over the years, who addressed the press on Saturday 22nd August, 2020 in his church during the presentation of his book; “A Compendium of Ten Thousand & More Fulfilled Prophecies 1994-2020” stressed that it was very impossible to see the success of CAMA.“The government wants to fight God, when they have not found solution to Nigerian problems.“CAMA Law is dead on arrival. I can fast for 300 days to fight the government over the law. We need the people who understand and know the rules and rudiments of issues to rule the Christian Association of Nigeria (CAN).“Church is not enterprises and it is not Plc. We collect tithes in our church and use it to take care of the less privileged.‘We have about 6,000 people that we take care of. Nobody can take over my church from me.“CAMA Law is a joke and the Federal Government cannot take over my church from me.“Many Christian leaders cannot talk because of their closeness to the government. A lot of churches are suffering. We used to make N200 as offering in our church in the past.“What has the government done about COVID-19 to now think of regulating the church,” he said.Primate Ayodele revealed that with a free and fair election, Governor Godwin Obaseki of the Peoples Democratic Party (PDP) would win the Edo State Election, but that with manipulation, he would lose to Pastor Osagie Ize Iyamu of the All Progressives Congress (APC).He however, added that there would be blood bath in the state during the election.On the Ondo State Election, he said that whether it is free or not, Governor Rotimi Akeredolu of the APC would win and that in Bayelsa State, Governor Duoye Diri would still be in office no matter what happens.On solutions to COVID-19, the man of God said that doctors have failed, and that they might not be able to find a solution to the pandemic.He said that he had predicted in 2003 that there was going to be a problem between 2017 and 2020, adding that he said in 2018 that a disease would ravage the whole world from Asia then.“I repeated it in 2019 that a disease that would shut down the whole world was coming from Asia. The only answer to COVID-19 is God, the government and the healthcare people have failed by not going to God on the matter.“We give water to people to deliver them from the ailment. The government would fail as they have taken God for granted.“COVID-19 would kill the people who have stolen Nigerian money and God would punish them. I said that it would take time for the disease to go, the government do not want it to go because there is corruption in it, they are making money from COVID-19.“Shutting down the church is not the solution, but we don’t have leaders who will tell them. COVID-19 has come to stay if we do not revert to God,” he said.Primate Ayodele, who faulted the leadership of the Christian Association of Nigeria (CAN), added that the leaders of the association were installed by the government so that they would be able to control them.He said: “I don’t believe in the leadership of CAN of PFN, so I am not their member. They should elect leaders democratically. The government knows what it takes to have CAN in their pockets,” he said.On Insecurity, he advised that all the Service Chiefs must be sacked for security to be in Nigeria, and that the issue in Southern Kaduna is political, adding that it has become a recurrent decimal.He accused the Federal Government of not understanding the problem Nigeria is facing and that the nation will continue to have security problem over this.“We need God to decide on the nation, we need to say the truth. Unless the Federal Government put the right measures in place there would be problem.“I am not telling any Christian to carry arms, but I will go into prayers on the issue and God will answer me. Every sitting Governor of Kaduna knows what to do about the crisis in the state,” he said.While repeating his prediction that the Presidents of Belarus and Equatorial Guinea would be removed, Primate Ayodele said that even if 10,000 ECOWAS come together they might not be able to solve the problem of Mali, which he said is due to godfatherism.He advised that there should be another election in the country, and that the soldiers have done the right thing by taking over so that they could solve the problem in the country.On the South West Security Outfit in Nigeria, Operation Amotekun, he said that it is a good security outfit, but that it doesn’t have longevity.He said that it is a good idea, but that the people behind it were not sincere, and that the region might see another Amotekun against Amotekun.He reiterated his prediction that Nigeria will break, but that he didn’t know the time and advised the Minister of Niger Delta, Senator Godswill Akpabio to resign his appointment, which he said is what is done in the Western World in such circumstances.He revealed his plans to empower families of late journalists, who he said supported his ministry over the years, during the ministry’s 27th Anniversary in 2021.“Our 27th anniversary next year would be for the press and we will remember the families of late journalists, who have helped our ministry and we would be empower other journalists,” he said.He further predicted that Governor Hope Uzodinma of Imo State would be removed if he is not careful as his matter would still go to the Supreme Court, adding that the APC would not win the governorship election in Anambra State in 2022. 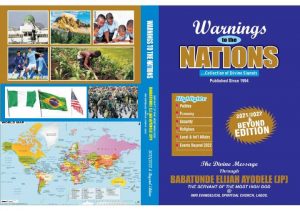