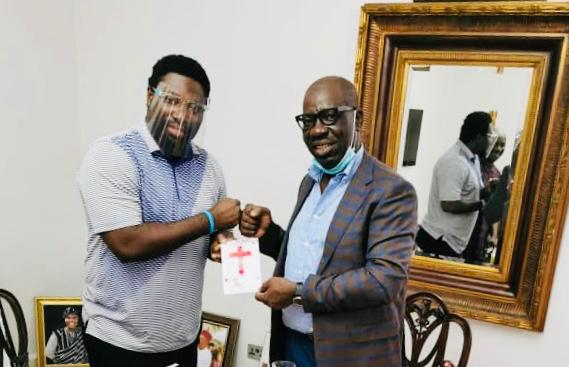 On September 20th Edo Indigenes and Nigeria as a whole celebrated the victory of Governor Godwin Obaseki at the pool and a victory for democracy. On July 5th, 2020 somewhere in Apo Mechanic village in Abuja, Prophet I O Samuel of Shiloh Word Chapel told his congregation that Edo state your Governor will dance a dance of Joy, because i am seeing the ruling party changing the figures but it will not stand, thus sayeth the Lord of host.

Coincidentally the prophecy was revealed after the Governor decamped to PDP a lot of people wrote the Governor off but Prophet I O Samuel stood his ground because God does not lie. Apart from giving the prophecy he met with both Obaseki and Ize-Iyamu and told them to embrace peace. Infact he was the only man of God that met with both candidates.

The prophecy went viral on social media and generated public opinion and the Governor Victory has affirmed that God still speak to some Prophet.
Prophet I O Samuel is known for his accurate prophecy that came to pass. He was the only prophet that revealed to Nigerians in his new year prophecy about Covid-19 and the wearing of face mask. In his new year prophecy to his congregation this year he warned Christians about persecution and the current controversial CAMA law which is presently tearing the country apart.
Prophet I O Samuel is a well respected man of God who doesn’t blow his trumpet despite several of his numerous prophecy that has been fulfilled. He has prophecy for world leaders, Governors, businessman and the common man that has come to pass. His church in Apo in Abuja is a mecca of sort to so many people seeking solutions to their problems.
The respected man of God is well known for his charitable works and support of a lot of needy people in the society and even non members has benefited from his kind hearted gestures. Weekly he spent millions on charity. He recently celebrated his 41st birthday