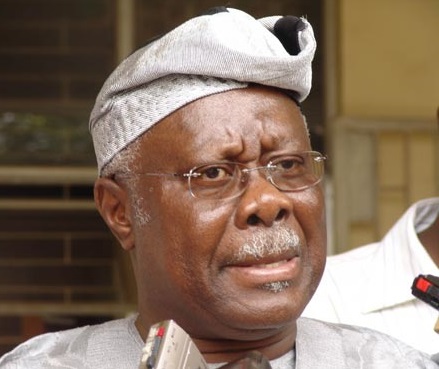 Events of the past few weeks have been tumultuous. Unfortunate things have happened. Lives have been lost. Property damaged. Essential institutions such as the police force and army are under justifiable scrutiny. Protests call for needed reform. Taking advantage of the situation, less noble actors have pressed forward, either to steal the hard-earned property of others or to prosecute selfish political objectives not germane to the protests at hand.

Even with many people taking undue license to press cases that would otherwise be tossed from the court of public opinion, one would think certain people would keep their mouths shut and hide their pens even during this period. Bode George is one such person. In commenting on the protests and trying to fault Bola Tinubu for every human imperfection ranging from the original sin in the Garden of Eden to the cost of tomatoes in the local market, George is either one of the world’s most bulbous hypocrites or the victim of the worst bout of amnesia ever recorded in the journals of medical science. In that this gruff, indelicate man well remembers the sound of his own name and responds to the ruffle of fresh naira with the pounce of a hungry jackal, one may fairly assume that his particular diathesis points more to the former moral decrepitude than to any medical infirmity that might affect his memory.

In his recent article published by NEW DAWN entitled “Lagos State THE Anger, The Rage”, Bode George huffs and puffs in contrived indignation at recent events in Lagos. He misrepresents himself as a storm for change and justice. He is nothing of the sort. For all of his blowing and the grand noise he thinks himself to make, he barely manufactures an audible moment. He is but a rickety, broken tea kettle trying futilely with all its waning might to bring a tiny pot of water to boil.

Try as it might, the rickety kettle is unstable and cannot hold itself upright. In the end, the only noteworthy sound it can muster is the sound of its falling to the floor after toppling from the counter top.

Inept as he is loquacious, the former naval commander, once again, has proven that he cannot successfully navigate a toy boat from one end of a bathtub to the other. He would make a wreck of even this simple assignment. Everything he has touched ends up being worse off, if not in complete ruins, than when he first happened upon it. His coming into a room is a cause for sorrow and his exit a cue for celebration. The man is an albatross around his own neck.

Yet, he had the audacity to write that all conscientious men must stand with the righteous at this hour and the he had “chosen to identify with the voiceless…” It seems that George discovered morality a bit late in the game of life and over a decade after the time when even a fiber of morality on his part would have amounted to something. George squeals about the deaths and destruction that have occurred in Lagos and then lays the trouble at the foot of one man who happens to be his political nemesis. Such as assignment of guilt by George is based on political convenience and con games rather than fact. George says Tinubu has questions to answer about the incident at Lekki but he offers no proof as to why Tinubu should be on the spot.

If George were really interested in justice, how come he did not jump at his master Obasanjo when the latter was commander in chief? As commander in chief, Obasanjo presided over the slaughter of several hundreds and perhaps thousands of unarmed innocent men, women and children in separate incidents in Zaki Biam and Odi. In each case, people were burned alive in their homes or dragged away and butchered. George voiced no indignation at these large massacres although they cost a hundred fold more lives than even all the precious lives lost everywhere in Lagos, not just Lekki during this period. Unjust death anywhere is a tragedy and must be condemned. But George’s background tells us that he is not crying because he cares about those who died or were wounded during events in Lagos but because the moment conveniently serves his political interest.

If he had morality, he would have chastised Obasanjo for killing innocent women and children and ransacking whole towns. Instead, George kept publicly quiet while in private endorsing the carnage set down by his boss who would eventually reveal himself to be a turncoat friend and master who would shuffled George off to prison. George talks of people being brought before the ICC in the Hague for what has happened in Lagos. His lawyer should advise him to be circumspect. Should some diligent human rights attorney take a good look at his role in the Obasanjo government and his endorsement of the confirmed large-scale massacres at Zaki Biam and Odi, that lawyer might take a very keen interest in Mr. George. George would surely quake in his boots upon finding on his doorstep one morning a mysterious brochure saying that he just won an all-expenses paid holiday to the Hague.

George is infamous for his meanness of personality and mercenary outlook toward policy – give him an official position and he will do any number of ugly things to keep it. In his writing, he called himself a elder statesman. However, one cannot award that title to oneself. It must be earned not unilaterally expropriated lest it be taken away by those who can rightly bestow it. George is no more a statesman than a mosquito is an eagle.

George claims Lagos to be an awful place yet he still lives here even after vowing to move away forever should the APC win the 2019 election. George will not move because, deep in his heart, he knows Lagos is the best that Nigeria has. It is the best not because of anything George did. It is the best despite George for he tried to thwart every major constructive initiative the state’s progressive governors have attempted since 1999.

George has the nerve to lament about the poor state of infrastructure and blame Tinubu and others. George drips with a double dose of highly toxic hypocrisy here. George well knows he encouraged Obasanjo to illegally withhold Lagos state funds when Tinubu was governor. George did this because he was afraid Tinubu would gain political support if allowed access to those funds to do projects in the state. Thus, George cared nothing that his antics might hurt Lagosians. He is captained by the perverse logic that rules all people who crave public office but are inherently unfit for the roles they seek. He believes the best way for him to gain the support of the people is to make them suffer. This is the way his mind worked then and the manner it malfunctions now. He is more interested in inveigling support than in duly enhancing the public welfare.

As governor, Tinubu brought power generator barges to Lagos to provide 300MW of power to the state and give residents and businesses more, cheaper power. What did George do? He did not applaud the initiative as a boon for Lagosians. He connived with Obasanjo to stop this. Again, he decided that he would rather see Lagosians suffer than Tinubu succeed at doing something new and needed for the people

Like he did in the past, George today is happy about the events that have befallen Lagos. He only feigns concern. He now is possessed of that cruel happiness that specially effects the mean at heart. They are only truly happy when misfortune comes to others. George now gloats the evildoer’s gloat and dances the wicked man’s dance. He is in this deformed way because he knows he cannot gain political traction by outperforming anyone. He cannot win by doing something positive because there is essentially noting positive in him. He is a bundle of negative impulses and actions. Thus, his only avenue of political pleasure and success is to tear down that which others have built. George is a breaker not maker of things.

His career has been monstrous. As military governor in Ondo, he was known to be corrupt to the utmost. He plundered the state’s treasury describing himself, by way of explanation, as a ‘Lagos Boy’ – giving the state a bad name. There was no part of the state treasure his sticky hand did not explore. As NPA chairman, he allowed the port to deteriorate. He is thus partly responsible for the economic bottleneck that is the port and all the harm and higher costs it brings to us. Worse, he was caught artificially segmenting large contracts into smaller ones so as to bypass procurement requirements and oversight. In this manner, he bilked the nation much like he did Ondo state as its governor. If nothing else, one can say that as a thief he has shown remarkable consistency if a coarseness of approach that always seems to get him caught.

As an operative of the PDP in Lagos and the SW, he has been the APC’s best friend for the division and antipathy he foments within his own party makes him one of the APC’s top recruiters.

Last, there is not a truly original thought that ever came from him. Toward the end of his piece, he asserts that the Lekki toll gate should be closed. George is a day late like most plagiarizers are. Tinubu made a similar recommendation the day before. George would not have made his copycat gesture but for having read Tinubu’s earlier statement.

Like the thief he is, George steals someone’s idea then foments hate against the other man for having had the idea first.

George is not a leader, a statesman or a visionary. His is a criminal mind and a cold hearted and an amoral personality. Bode, don’t forget there are still people old enough to remember where you are truly from.

At the end of the statement, George signs off “CON.” For most people that would mean Commander of the Niger. Yet, to get the perfect description of him, one must simply use this word before writing the word “artist” who can’t even identify the grave of his father in Ogun State… WHAT A “LAGOSIAN”.

Adeduntan, a public activist and a true son of Lagos State