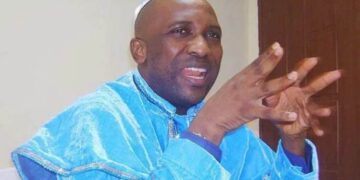 Primate Ayodele The leader of INRI Evangelical spiritual church, Primate Elijah Ayodele has revealed God’s mind on the next inspector general of police, as the tenure of the incumbent IGP, Mohammed Adamu gradually comes to an end.

There has been several talks and tension on who takes over from IGP Adamu and as it is known that God doesn’t keep anything from his prophets, Primate Ayodele has revealed those who has the blessing of God to become to next IGP.

According to the popular prophet, the appointment will be among three people in the police force namely Dig Usman Alkali Baba, Fdc., Aig. Dasuki Galadanchi Mni and AIG. Moses Ambakina Jitoboh, MniHe made it known that if President Buhari can appoint anyone out of the three of them, the security situation of Nigeria will stabilize.

‘The best candidate for the appointment of the new Inspector General Of Police after Mohammed Adamu is between Dig Usman Alkali Baba, Fdc., Aig. Dasuki Galadanchi Mni and Aig. Moses Ambakina Jitoboh, mni.

The security network is Nigeria is troubled, in the next two months, things can go wrong if care is not taken, one of these people are the ones that can help stabilize the security situation of Nigeria.

One of them will cause change in the country’s security system’Furthemore, while speaking briefly about 2023 politics, Primate Ayodele revealed that he foresees that APC and PDP will break, and that a third force will arise.

‘APC, PDP will eventually break, and a third force will arise. The leading parties are confused, the third force is coming, it will be a youth party’