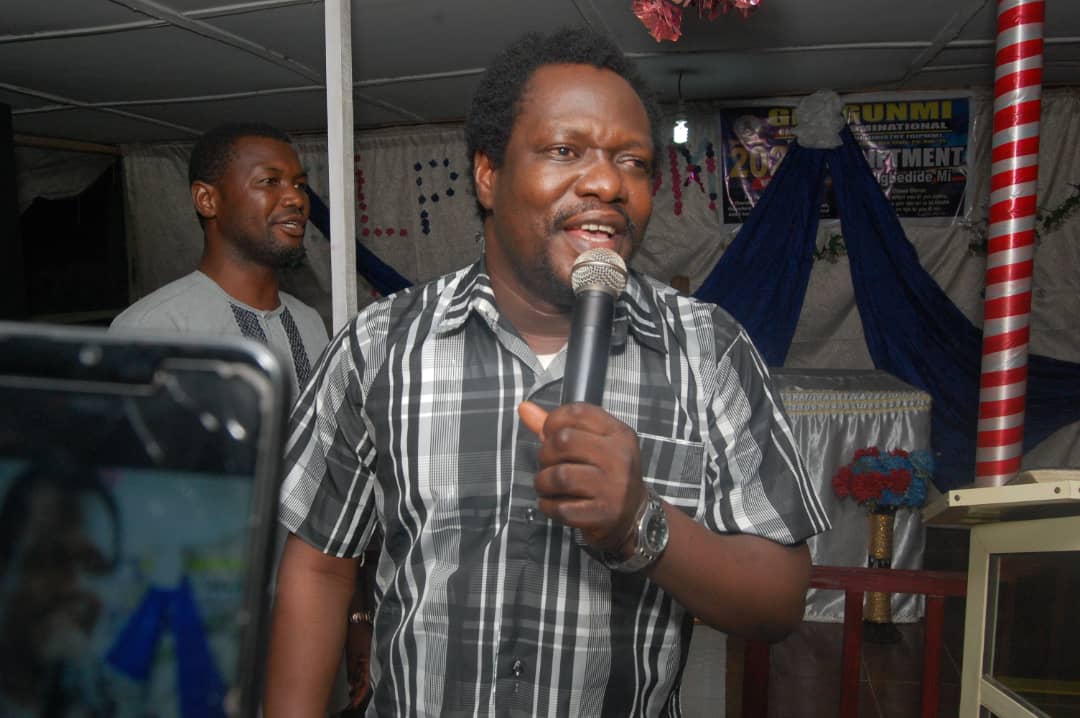 Prophet Shitu Adeniyi aka Oluwa logbon a singer, and an actor chronicles his life and how he became blind!
Prophet Shitu Adeniyi aka Oluwalogbon can be described as a man with nine lives. He is a man of God, a gospel singer and also an actor. That is not the reason why he should be described as a man with nine lives. No! Here is a man who lost his wife during child labour he could only came back home with the baby while the mother was committed to mother earth. Thing couldn’t have got worse anymore but that seems like curtain raiser in what fate had in stock for him as he lost his sight thereafter
Hold on! Don’t start the music of pity for him. He will tell you he has no regret whatsoever fate has made him to go through “I don’t think there is anything any man with sight can do that I can’t do”
I am a clergy man also a gospel singer, I once sing fuji music, there is no type of music I can’t sing. I have online pilot radio and online TV they work in collaboration with Lamgoblic FM Radio station Ibadan I also run Shitu music TV
Singing is a talent it is not what I learnt it is inborn it is a talent. Even before I accepted Jesus Christ I have been singing. I am also an actor; I have been into acting since 90s through Christian movies I am a producer. In fact my movie titled “One house (Ile Kan) will be released soon as it features many talented artistes like: Funke Eti, Uncle Ladi, Pastor Shitu Daniel, and Ola Samuel among others. Mr. Deji is the director while Kunle Afod is one of the actors in the film; it will be a good movie for every house to watch when it is finally released.
The story of my blindness
It is a long story. In this life man will have a lot of difficulties and lot of hurdles to go through we all have different challenges but one must not continue to dwell in the challenges and one must not believe it’s all over for him
It’s not the eyes that started first. I can remember that it was my first wife that first died after three months that my first wife died that it happened. How does it happen? I was in 31 days fasting and prayer as directed by God when it was a day to finished the fasting and prayer my wife died while she was in neighbours , some people are whispering and gossiping that it was because of my sins that made me to lose my wife, even my friends are saying did you know whether he (referring to me) put his hands into one sin that made his wife to died just like that , they went to the point that whenever I prophesized on something and it came to pass they will say I used my eyes to source for that power, they believe I can’t do anything without the help of God, they all concurred that I used my eyes and my wife for sacrifice but all I could utter was God knows best and he knows the reason why he did that. It was a very bad experience, we took wife to mortuary and brought the baby home, then the eyes problems started and I lost my sight. At times he does make me sad but that doesn’t make me to lose my focus on what to do in life, like I always say there is nothing
I was not born blind, I used my eyes to go to school I also used my eyes to start the work of God, I used my eyes to compose my songs so it wasn’t as if I was born blind. After I lost my first wife I have re-married.
How do you get your script since you can’t read?
Its talent no matter how my roles are, if somebody just told me what to do I will do it perfectly and if it is my movie I will give someone to write it for me and thereafter I will know what to do with my roles since I am the writer
Don’t you see your situation as challenges?
I don’t see it as one, since there is nothing a two eye person can do that I can’t do as far as going or moving forward is concerned
My Mentor
While I was small I cherish Ebenezer Obey that is why some people called me “Baba Jeje” Now I like Yinka Aiyefele. Baba Aworinde is my father, we have a very good relationship.