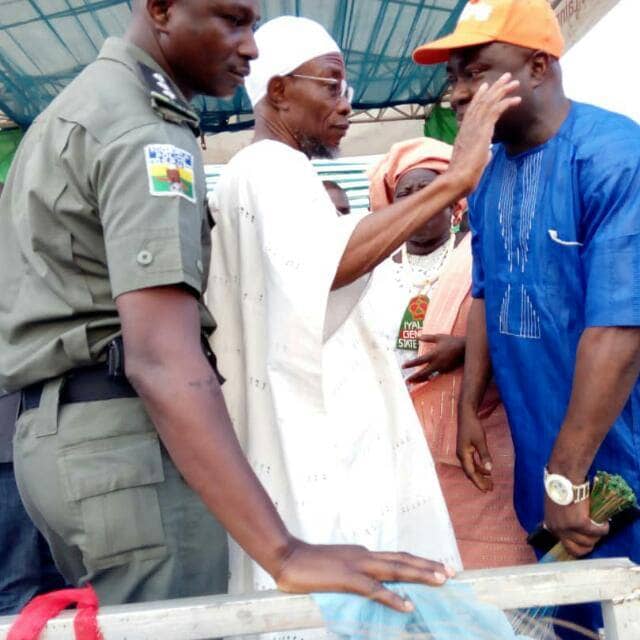 First, he’s a broadcaster and the MD of Radio Omo Kootu and Aje TV. Secondly, he’s a traditional singer who has taking his talent across the nation and abroad.
Niyi Ajetomobi popularly Known as Aladamojesha also joined politics few years back and take a bold step to contest for the governorship position of Osun state.
In this exclusive interview with Giraffeglobal publisher, Akin Sokoya, this amiable and respected indigine of Osun state opens up for the first time on his political background.
In his word, ” I didn’t just delve into politics, it runs in my blood. I’m from Odo- Ijesha, Atakumosa East Local government in Osun State. My late grandfather, Samu Aje was a top leader in UPN and AG in those days and a friend to late Pa. Awolowo and late Akintola of blessed memory. My grandfather was the UPN party chairman between 1979 and 1981 at Atakumosa Local government.
” I could remember in 1966 during operation ”Wet – E”, then in Oyo state, Awolowo and Akintola came to Ilesha for their campaign and there was political chaos, Awolowo and Akintola escaped to Odo- Ijesha, to sleep in my grandfather’s house”.

Speaking further, Aladamojesha noted that, when he passed out from Commercial 4, he was asked to get accreditation from his LG, he then came down to Ise-Ijesha, to meet his grandfather, whom he knew has all the opportunity to get it for him. But when his grandfather saw that he was progressing in his education, he cried bitterly, and said, hadn’t been he was above 18years, and has attained a school certificate, he would have presented him to Bola Ige. He said, his grandfather told him that Bola Ige told him to bring two of his kids for political appointment and since his own father didn’t go to school, he has to present Lawyer Olalere Adebayo, who was made the commissioner of Finance, and Hon. Otiti who got the appointment as the secretary to a Local government then with his Primary school certificate.
” I persuaded my grandfather not to cry, because he couldn’t present his own biological sons at that moment, but he should not loose hope because he doesn’t know what the future holds for him in Politics.”
After his sojourning in the broadcasting industry and music industry for many decades, the blood of politics he inherited from his grandfather was disturbing him and he gave in to partisan politics and thereafter took a bold step to contest for the number 1 position of Osun state before he later decamped to APC.

When we asked him if he’s contesting in the next election in Osun state, Ajetomobi said, as an indigine of Osun, he’s eligible to contest, but he’s still consulting his political elders to give him a nod.

He recollected that when he contested during the last election, he was asked to decamp to APC with his followers, which they did and spent their money and strength to support the governor but till today, governor Oyetola has done nothing for them.
Hon. Niyi Ajetomobi, concluded that they would rather channel their funds, energy and strength to support his own ambition in the next election if eventually nothing is done to compensate them in this government of the day of Osun state.
He therefore persuade his followers to keep calm for now and be ready to swing into actions to support him in the next dispension if he gets a nod from his political elders to contest.