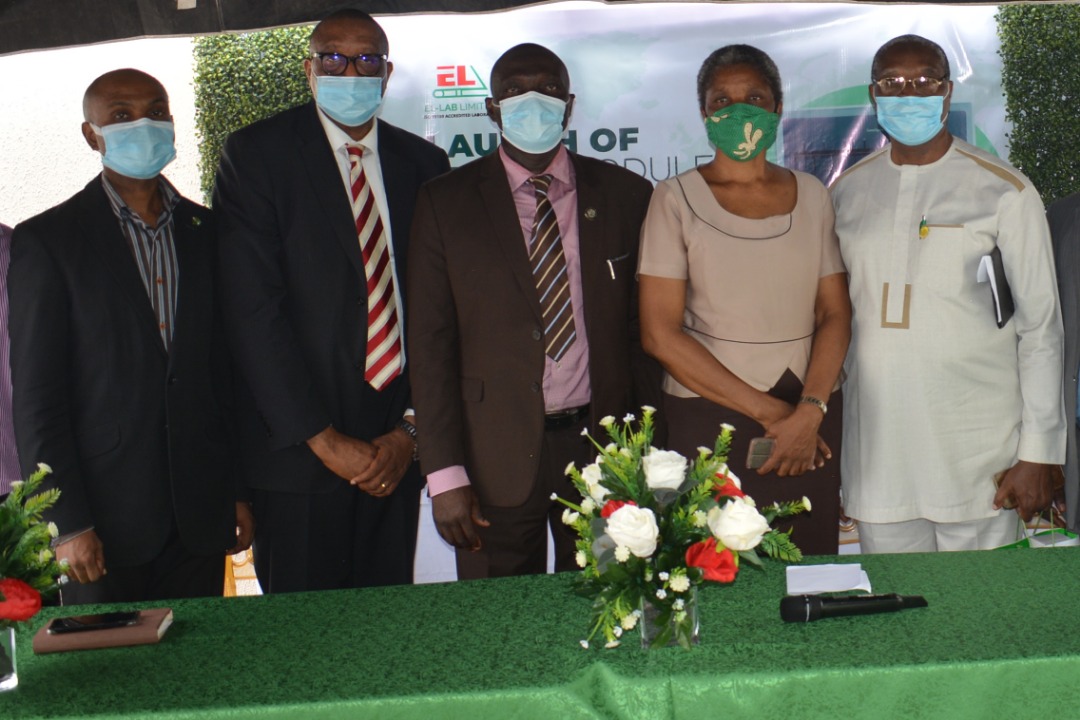 The Federal Ministry of Health, Lagos State Government and USAID/SHOPS Plus unveiled a 16-Module GeneXpert Machine, the first of its kind in the country, on Monday, March 22nd, 2021 at the Diagnostics Complex of EL-Lab in Festac Town, Lagos.
According to WHO, TB is a major public health concern in Nigeria with the country ranked 6th among the 30 high TB burden countries globally and about 15 percent of the global gap in TB case notification.
The machine, which is for molecular diagnosis of tuberculosis (TB), was purchased by the United States Agency for International Development (USAID) through its funded Sustaining Health Outcomes through the Private Sector Plus project (SHOPS Plus) for the government of Nigeria to facilitate case detection in the private sector.  The machine was launched at EL-Lab Ltd, one of the leading indigenous medical diagnostic and research centres in Nigeria, with a view to closing the gap in TB case detection, notification, and treatment. EL-Lab is one of the 118 engaged stand-alone laboratories trained by SHOPS/Plus and has been very active in PPM Mix activities in Lagos State.
Mrs. Ayodele Iroko, the Senior Private Sector Advisor USAID/SHOPS Plus who anchored the event started by commending all private sector partners that have remained committed to the proactive screening, testing, and treating of TB in their various communities. She also encouraged all engaged health professional associations to work tenaciously at expanding the pool of private sector TB providers by scaling up engagement to include more of their members while facilitating efforts to integrate tested approaches into facilities service provision for ownership and sustainability.
In his opening remarks, the National Coordinator, National Tuberculosis and Leprosy Control Programme (NTBLCP), Dr Chukwuma Anyaike identified two main national goals as regards TB; to find the missing cases, and to ensure all cases found are adequately treated.
He applauded the efforts of the private sector partners, citing the increase in TB case finding and recent times but also emphasised that there is still a lot of room for improvement. Anyaike also stressed the need for more up-to-date statistical data on TB cases in Nigeria.

Anyaike described the introduction of the 16-Module GeneXpert Machine as a “milestone” and encouraged optimal use of the machine to achieve maximal results. He pointed out, however, that the mission goes beyond case finding, to ensuring treatment for all cases.  He encouraged stakeholders to re-strategize and think outside the box in order to “fish out all TB cases.”

Omosalewa Oyelaran, Deputy Director at USAID Nigeria office for HIV/AIDS & TB also commended the efforts of all stakeholders and encouraged them to take up the challenge of finding and treating all cases of TB in Nigeria. She expressed her excitement about the launching of the 16-Module GeneXpert Machine stating that it will increase the testing capacity, allowing patients to know their status and be placed on treatment as quickly as possible. Oyelaran expressed her organization’s commitment to supporting private sector engagement while encouraging them to take ownership and add value to success stories. She also encouraged all stakeholders to continue to raise awareness around the upcoming World Tuberculosis Day.
In a brief goodwill message, Mr. Mayowa Joel, the Executive Director of STOP TB Partnership expressed gratitude to USAID and SHOPS Plus for their efforts in facilitating and supporting private sector engagement.  He emphasized the need to strengthen and sustain the public -private collaboration.

Individual remarks were also given by Dr Makinde Akinlemibola, Chairman, Association of General and Private Medical Practitioners of Nigeria, Lagos State; Mr. Clement Olaifa, Chairman, Lagos State Association of General & Private Nursing Practitioners of Nigeria, Mr. Anorue C.J Chairman, Guild of Private Medical Laboratory Directors, Lagos State. Pharm. Lawrence Ekhator – Chairman, Association of Community Pharmacists of Nigeria, Lagos State. Each pledged their commitment to vision of 100 percent case finding and treatment, promising to improve their contributions with sustainable strategies, particularly emphasizing their willingness to work with the government in achieving the common goal.
The Medical Laboratory Science Council of Nigeria, through its registrar and CEO, Dr Tosan Erhabor also congratulated EL-Lab Diagnostics on the official unveiling of the First ever 16 modules GeneXpert machine in Nigeria. He also pledged his commitment, on behalf of the organization, to scale up TB case finding and treatment.
Dr Bolanle Olusola –Faleye, TB Technical Director of SHOPS Plus, while sharing the successes of the involvement of the private sector commended the synergy between the private sector and government, as well as the high level of dedication demonstrated by partners and donors.
Expanding further on these successes, Mr. Elochukwu Adibo, CEO of EL-Lab Medical Diagnostic Ltd explained that the involvement of the private sector is gradually ensuring that Nigeria’s unenviable ranking as  6th globally among the high burden countries and first in Africa with high burden for TB becomes a thing of the past.
He noted that the adoption of GeneXpert MTB/RIF test as the entry point diagnostic tool for TB case detection was done in 2016, and Federal Government’s wisdom in engaging the private health sector has tremendously helped to increase case detection and treatment.
Adibo stated that out of over 4000 networks of standalone Laboratories under Guild of Private Medical laboratory Directors, (GMLD), the Hon. Minister for Health donated a 4-module GeneXpert machine on September 4, 2018, to EL-lab Medical Diagnostics, Lagos.
EL-Lab, applying private sector efficiency, optimized testing with the machine which brought about significant improvement in TB case detection and testing with a tremendous support and partnership from the USAID /SHOPS Plus program network and their technical/logistic excellence.
He pointed out the need for infrastructure and logistics upgrade, especially with regards to power supply to meet the demand for uninterrupted service delivery.  He also called on the government and all concerned parties to remove the bottlenecks in the current partnerships to enable unhindered private sector contribution, to meet Country goals and National Strategic Plan for TB which will ultimately improve Nigeria’s global ranking.
Speaking before formally unveiling the new 16 modular machine, Dr Agbolagorite Olurotimi, Director of Disease Control, Lagos State who represented the Commissioner for Health, Lagos State, Prof Emmanuel Akinola Abayomi commended the private sector for their contributions at all levels, to the case finding and treatment of TB cases. He particularly commended EL-Lab’s commitment in testing samples both from government and private facilities. He urged stakeholders to continue to work at the desired goal, as Nigeria still has a long way to go with regards to TB case finding and treatment. He promised to investigate the identified bottlenecks that hinder private sector involvement and encouraged stakeholders to keep identifying and reporting such hindrances.
After his speech, the Commissioner for Health, Lagos State, Prof. Emmanuel Akinola Abayomi, who was represented by Dr Agbolagorite Olurotimi with other guests led by Dr Elochukwu Adibo proceeded on a walk-through tour of the laboratory that culminated into the formal cutting of ribbons and unveiling the new machine to the joy and excitement of both the physical and virtual audience present at the event.
Testing of samples from public and private health institutions was demonstrated using the
new 16 module GeneXpert machine.

Mr. Ifeanyi Okekearu, the Chief of Party of SHOPS/Plus commended the involvement of all partners and appreciated their time at the event.