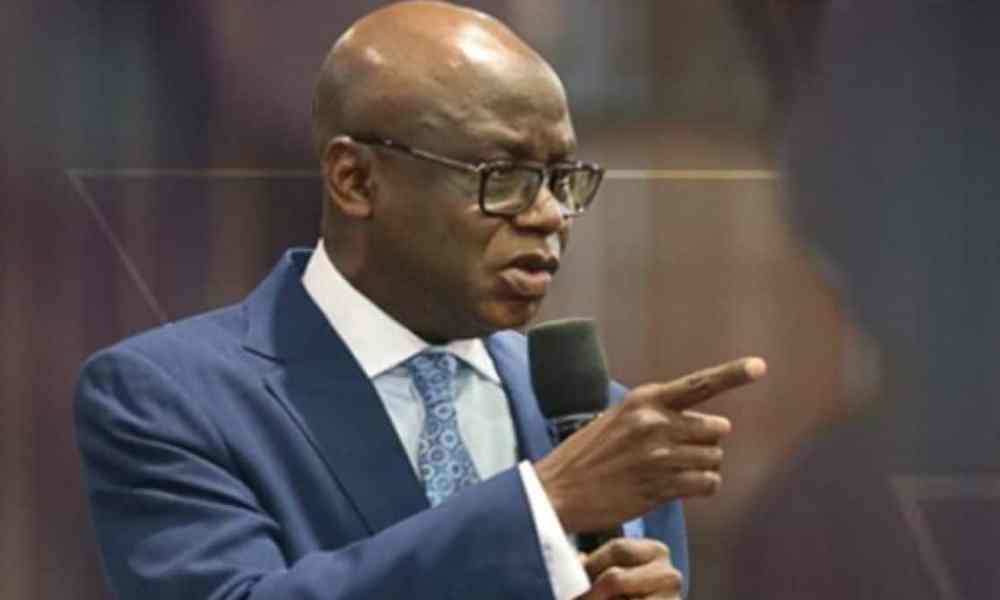 • Kukah did not speak like a man of God, cleric’s message lacks fairness, says Presidency

The Catholic Bishop of Sokoto Diocese, Kukah, in his Easter message on Sunday, said the Buhari regime was taking care of repentant Boko Haram insurgents, but lacked empathy for their victims.

In his Easter message titled, ‘the conspicuous handwriting on the wall,’ the  Overseer of the Citadel Global Community Church, Bakare, said Nigeria was in a state of emergency, adding that her health was in danger.

Kukah, in his message titled, “Nigeria: Before our glory departs”, obtained by The PUNCH in Abuja,  recalled that Buhari, on May 29, 2015, during his inauguration,  said, ‘Boko Haram is a typical case of small fires causing large fires.’

The Catholic priest lamented that  before Buhar’s watch, “the fires are consuming the nation, and in many instances, they indeed start small.”

Kukah also hit the Buhari regime for rehabilitating insurgents, saying it was a clear demonstration of the regime’s lack of feelings for victims of banditry and insurgency,  who were left to mourn their dead ones and paid ransoms to free their relatives.

Kukah said the recent World Happiness Report stated that  Nigeria was one of the unhappiest nations in the world.

He  said, “This is unacceptable but understandable. Our clay-footed fight against corruption has not moved the needle of transparency forward.

“Of course, being the poverty capital of the world comes with its rewards such as banditry, violence, death, sorrow, blood, poverty, misery, and tears. Our cup of sorrow is permanently full; hence the exponential rise in the frustration curve across the country.

“Sadly, human life is haemorrhaging so badly in Nigeria, but the greatest tragedy is the death of empathy from those in power. Mysteriously, the government is investing billions of naira in rehabilitating so-called Boko Haram repentant members and their other partners in crime in the belief that they want to turn a new leaf.

“These criminals have waged war against their country, murdered thousands of citizens, destroyed infrastructure and rendered entire families permanently displaced and dislocated. Why should rehabilitating the perpetrators be more important than bringing succour to the victims?

“When kidnapped or killed, victims and their families are left to their wits. They cry alone, bury their loved ones alone. And our government expects us to be patriotic? The victims of violence need empathy, which the dictionary defines as the ability to understand and share the feelings of the other.

“A critical deficit of empathy on the side of the government makes healing almost impossible for the victims. We have not heard anything about a rehabilitation programme for the thousands of schoolchildren who have been victims of abduction. We seem to assume that their return to their schools is sufficient.

“Left unaddressed, the traumatic effect of their horrors will haunt them for a long time. Tomorrow’s parents, military generals, top security men and women, governors, senators, and ministers will come from today’s pool of traumatised children. The security quandary is the greatest indictment of this government.

“When governments face legitimacy crises, they fall back on serving the sour broth of propaganda, half-truths, and outright lies. They manufacture consent by creating imaginary enemies, setting citizens against one another by deploying religion, ethnicity, region, and other platforms while appealing to the base emotions of patriotism.”

Kukah expressed disappointment that Buhari could not match his words with action, having boasted that during his inaugural speech to extinguish the fire of Boko Haram.

He added, “The rumblings over the wearing of a hijab in Kwara State suggest that we have not seen the end of individuals sacrificing national cohesion to feed their personal ambitions by starting small fires.

“Most politicians hardly think through the long-term effects of these pyrrhic victories of using religion. What started as a small fire with  adoption of Sharia in Zamfara in 1999, spread across the northern states. Ordinary people broke into ecstatic joy. Today, what has become of the North? What are the lessons?”

Bakare, who was Buhari’s running mate in the 2011 presidential election, recalled how the President, who contested on the platform of the Congress for Progressive Change, broke down in tears at a press conference because of his passion for Nigeria.

He quoted Buhari to have said, “I have decided to dedicate the remainder of my life to fighting for the people of this country.”

The cleric, who traced the history of the formation of the All Progressives Congress, said the situation in Nigeria was not the dream both he and Buhari had for the country.

Nigeria, in a state of emergency – Bakare

According to him, in medicine, an emergency is defined as “an acute injury or illness that poses an immediate risk to a person’s life or long-term health, sometimes referred to as a situation risking ‘life or limb. For many years, Nigeria was in the intensive care unit of the universe.”

Bakare stated that Nigeria was  in a critical state and that her survival was hanging in the balance, adding that she had been rushed to the emergency room.

He said among others the aim of his address was to ensure that President “does not fall victim to what is historically described, especially in American politics, as the ‘second-term curse.’

According to him,  political analysts describe the second-term curse as “the perceived tendency of second terms of US presidents to be less successful than their first terms.”

Bakare recalled that when Shehu Shagari administration was overthrown in 1983, Buhari as a military head of state alleged that the civilian administration lacked  financial discipline and prudent management of the economy.

He also said Buhari accused the Shagari administration of depending  “largely on internal and external borrowing to execute government projects with attendant domestic pressure and soaring external debts.”

Situations in Nigeria reflect what Buhari accused Shagari of – Bakare

Quoting words of Irish poet, W.B. Yeats,  popularised by the late Chinua Achebe, he stated, “Things are falling apart; the centre cannot hold; mere anarchy is loosed upon our land.”

He said despite government’s claim of technically defeating Boko Haram, the insurgents were overrunning more villages and killing soldiers.

He stated that  nearly seven years after 112  Chibok girls were kidnapped,  the girls and  Leah Sharibu, who was abducted in Dapchi, Yobe State in 2018, had not been rescued.

Bakare noted, “The start-up kidnap industry has secured funding and has now scaled from Dapchi to Kankara and from Kagara to Jangebe and elsewhere.We have experienced the cycle of abduction of school children, alleged ransom payments sometimes in the hundreds of millions of naira, the release of the abducted school children, the denial by the government of any ransom payment, followed by the next cycle of abduction. Nigerians are then left wondering which school will be next.

“If our schools degenerate into kidnap hotbeds on this administration’s watch, not even the school feeding programme can encourage over 10 million out-of-school children to enrol in a school.”

“In fact, the number of out-of-school children can be expected to rise with the swelling ranks of pupils whose parents are scared to return them to their schools for fear of He said activities of were destabilising  farming, adding,  “Not even the President’s controversial shoot-on-sight order for illegal bearers of AK-47guns has proved sufficient to abate these attacks.”

According to him, the massacre of dozens of rice farmers in Garin Kwashebe  in Borno State is a clear indicator of the limitation of window dressing in governance intervention.

Bakare stated,  “It clearly reminded us that if farmlands remain unsafe for farmers, our brilliant agricultural intervention policies will suffer in the long run because they do not address the root problems.”

He added that the regime was still battling with corruption issues including  the opaqueness of the fuel subsidy regime, which the Goodluck Jonathan administration was criticised for.

The cleric advised the President to restructure the country before handing over in 2023.

“The greatest demand on the administration of President Muhammadu Buhari is to facilitate the emergence of legitimate regional governance frameworks that can fill the vacuum and flush out the illegitimate structures,” he said.

Kukah did not speak like a man of God,  his message lacks fairness,   says Presidency

The Presidency on Sunday responded to Kukah’s message, saying  the Catholic Bishop of Sokoto Diocese did not speak like a man of God.

The Senior Special Assistant to the President on Media and Publicity, Garba Shehu, said this in a statement titled “Kukah’s Buhari bashing is ungodly.”

Shehu said since Kukah professed to be a man of God , ideology should not stand in the way of facts and fairness.

He said the bishop played politics in some of his submissions in the Easter message.

The statement read, “All citizens have their individual ideologies, even their own versions of truth.

“But if you profess to being a man of God, as Father Mathew Hassan Kukah does, ideology should not stand in the way of facts and fairness.

“Father Kukah has said some things that are inexplicable in his Easter massage.

“But, in saying that the Boko Haram terrorism is worse than it was in 2015, he did not speak like a man of God. Kukah should go to Borno or Adamawa to ask the citizens there the difference between 2014 and 2021.

“Furthermore, the Hijab issue in Kwara State on which he dwelt is a state matter which the courts of the land have adjudicated. They are matters that have appeared in several states as far back as the Obasanjo administration. In all of that, when and where did the name of President Buhari feature? He is playing partisan politics by dragging the President into it.

“An administration that has created a whole ministry, for the first time in the country’s history, appropriating enormous resources to it, to deal with issues of internally displaced persons cannot, in all rightfulness be accused of not caring for them.

“Some of the comments are no more than a sample of the unrestrained rhetoric Fr. Kukah trades in, which he often does in the guise of a homily.