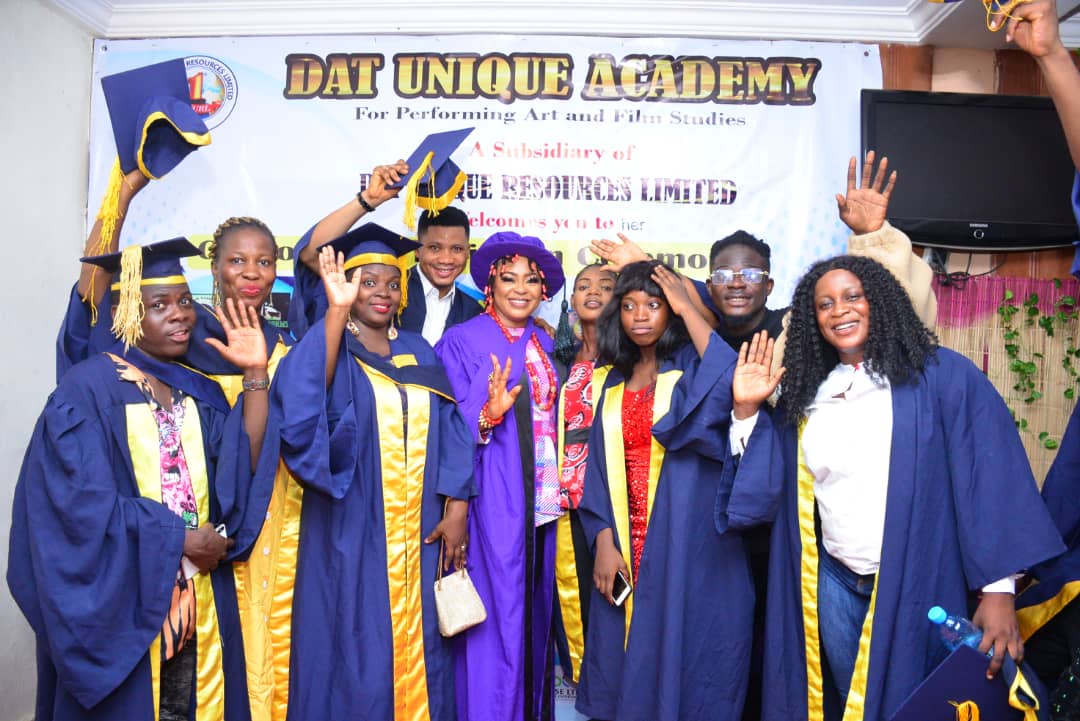 The glamorous event, that featured dances, dance drama and initiation to stage, held at the Labi Oasis Theatre, Ikorodu, with a rich mixture of both the old and youngsters in the Nigerian movie industry, who came to lend support to one of their own.

Also present were Kemi Korede, Adekola Tijani (Golugo), Olu Olowogemo (Harijan), Debo Alexander, Toyosi Adesanya, Taiwo Ibikunle and Wole Ojojolu, the Chairman of TAMPAN, Ikorodu chapter.
The event, according to Sola Kosoko Abina, was for her an epoch making one, as it is a major milestone in her journey to fulfill one of her major passion in life, developing talents and helping young people in the society to have a reason for living and building a lifetime career.

Speaking at the event,
Sola Kosoko Abina said: “Dat Unique Academy is a culmination of years of my involvement in the training and development of youngsters in the movie industry, albeit informally. Over the years, I have had the opportunity and privilege to mold the ambition and careers of several youngsters who have passion for the movie industry. These youngsters usually approach me with their interest in the movie industry, and as someone with the heart to mentor the younger generation, I was always willing to take them in, make them follow me to locations, in what became on the job training.
“At several times, I tried referring some to my colleagues for training but most times, these youngsters insist on learning through me. I continued with this model for a long time but later decided to discontinue it because it became a big burden on me, as I had to constantly foot their bills, since many of them were indigent trainees. Things like accommodation for both male and female, feeding and at times transport fare were borne by me. It was indeed a great burden on my lean resources.
“As the informal training model was put on hold, the idea and urge to float a formal training school became more pressing in my heart. This is because I see the training of youngsters who have passion for our industry as my own way of giving back and impacting the society positively.
“I believe it is easier to stem youth restiveness and redeem some of our youths from going astray if we can get them trained and actively qengaged in the industry. So for me, it was a dream to ensure that our youth population have access to quality training that will equip them for a lifetime career, and also stop people who are not trained from dominating the industry and continue to constitute a nuisance as the case has been.
“After much foot dragging, I finally decided to set up the training with with the sole purpose of giving a comprehensive theatre training.

It was founded in January 2020 and it is located in Ibeshe, Ikorodu, Lagos.
“What we are doing today is the celebration of a vision; a vision to take our youths out of the streets and set them on a sure footing that will make them responsible members of the society and secure a platform to build a career that will last them a lifetime.”
The wave making actress however called on well meaning Nigerians, at home and in Diaspora to partner with the academy in fulfilling its mandate, which is youth empowerment and development.
“I am therefore using this opportunity to call on Nigerians both at home and in Diaspora, who have the means to partner with Dat Unique Academy in the training of our youths. The future of our nation rests squarely on this young people and whatever we can do to set them on a solid pedestal must be done. The vision of the academy is not what we can actualise alone, we need your support in anyway you can”, she said.

Speaking further on the next plan of the academy, Sola Kosoko Abina said a new session is billed to start before the end of April, 2021 for a six month course in Acting, Script Writing, Directing, Dance, Cinematography, Editing, Make up and Music.