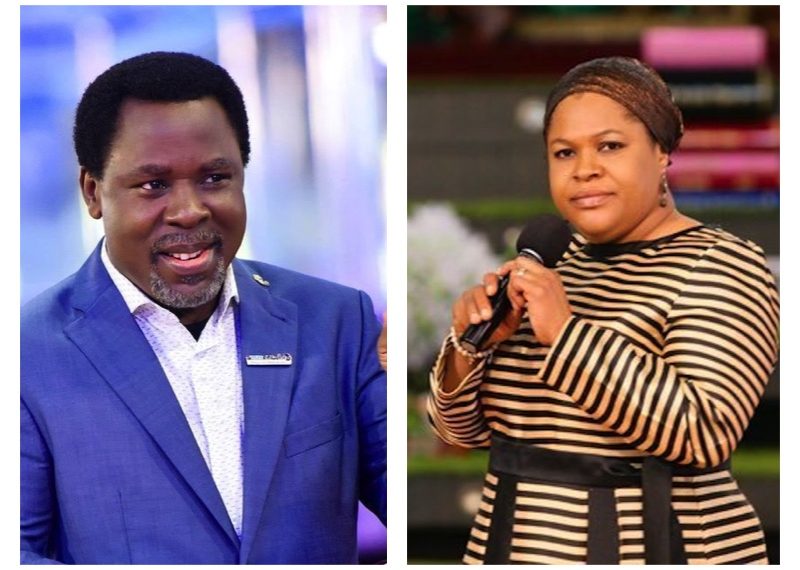 Evelyn Joshua, wife of Temitope Balogun Joshua, popularly known as T.B. Joshua, the founder of Synagogue Church of All Nations (SCOAN), has broken the silence since the news of her husband’s death made rounds.

Speaking with some selected journalists on Sunday, Evelyn said the cleric “ended his race prayerfully”. She revealed that her husband spent about three hours in prayers before the last service on the mountain and was looking very healthy. She said he never showed any sign of illness or worry and that his main concern was about the prayer line they offered to Indians against the COVID-19 pandemic.

“Afterward, he came up to shower and I left him to have some time to prepare for service as worship had started.

“Few minutes later, he stepped out for ministration. While ministering, he spoke about a time to come and time to leave. His statements were spiritual and suddenly, he left the stage and went to his inner chambers.

“I waited a few minutes and thereafter decided to check on him. I met him sitting on the chair like someone reflecting but unconscious. I quickly beckoned on his disciples who came and tried to revive him to no avail.

“Of a truth, he went home to be with the Lord and left us with a message, watch and pray,” she submitted.

Evelyn also took to social media to express ocean-deep emotions over the loss of her husband.

Amid the ban by the Federal Government on the usage of popular microblogging platform, Twitter, in Nigeria, Evelyn took to her official Twitter handle, @Mama_Evelyn, and wrote a short message.

She said, “Losing a loved one is never easy; whether sudden or foreseen. It is always heart-breaking. Grief can wreak havoc on our overall well-being. That’s why it’s important to stay rooted to the Almighty. Only He can lessen our heartache and comfort us in these times. Seek refuge in him.”

About a week ago, Evelyn had taken to her Twitter page to write, “Faith is trusting and believing that the Almighty has your back no matter what you’re going through. Even when you can’t comprehend what’s going on, you trust Him. You know He will get you out of unfavourable situations. Best motto to live by; do your best, leave the rest to Him!”

Many have described Evelyn as “the pillar” of the late preacher’s life and ministry and said it would be a serious hit on the family.

Joshua, who is survived by children and a wife, hailed from Arigidi Akoko, in Ondo State.

He founded the Synagogue Church in 1987. The church which has its headquarters in Lagos State accommodates over 15,000 worshippers per gathering. The church currently has branches in Ghana, the United Kingdom, South Africa, and Greece.

Joshua is one of the richest and philanthropic pastors in Nigeria. He was estimated to worth over $15m in 2011, by Forbes. His healing powers had attracted thousands of people from all over the world to Nigeria.

He owns Emmanuel TV, a Christian television network, and is close friends with some world leaders including former Ghanaian President,  Atta Mills.