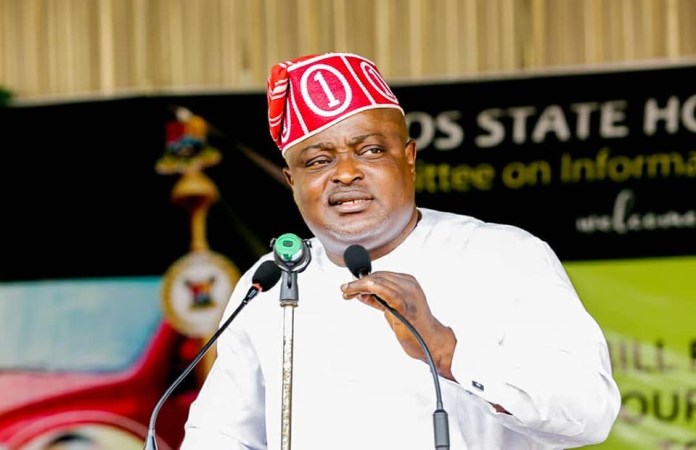 The Lagos State House of Assembly on Tuesday called on the federal government to engage agitators across the country rather than employ the use of force.

This is as the Speaker of the House, Rt. Hon. (Dr) Mudashiru Obasa, argued that the use of the military in an attempt to quell agitations for secession would not yield the desired result since it is part of democracy for a people to speak out concerning how they are governed.

Obasa, who noted that the 22 years of unbroken democracy being enjoyed by Nigeria is worthy of celebration, however, said there many things yet to be done after so long adding that these had led to the tension in the country.

The Speaker, who made the comment during the debate on a motion about the 22 years of unbroken democracy in Nigeria raised by Hon. Setonji David, commended President Muhammadu Buhari for signing an executive order granting autonomy to state legislatures and judiciary and for honouring the late MKO Abiola with the declaration of June 12 as democracy day.

Noting that democracy is a wholesome package, he added: “It is not about electing us alone. Those that elected us also have freedom, they have the right to protest where they think things are not working.

“The right to protest should not be taken away from them as long as such right is not taken for granted.

“There is no crime in seeking for separate nations within an existing nation,” he said as he mentioned some countries where the citizens have called for disintegration.

“Those representing the people through the ideology of social contract must listen to the people,” he said urging the government to engage the groups and calling on the National Assembly members to go beyond weeping on the floor of the House and truly rejig the constitution.

“For the southern governors, having stated their position, they should not go to sleep. They should follow it through,” he urged.

Concerning the issues of insecurity, the Speaker said: “We will continue to cry that we have state police and devolution of power.”

He said restructuring, which he described as part of the solutions and not a problem, should have addressed economic challenges and poverty level just as he lamented that the Naira has continued to fall against the Dollar.

He praised Lagos as the true example of democracy and promised that the state would continue to lead in this area.

The House observed a minute silence in honour of the late MKO Abiola and all those who lost their lives in the course of the struggle for democracy.

Earlier in his contribution, Hon. Rotimi Olowo described the current constitution as fraud.

“This 1999 constitution amended so many times can no longer be embellished. It is fraud,” he said as he called for the semblance of regionalism where the interest of the minority is taken care of.

To him, the current amendment is another effort in futility and a new constitution reflecting the will of the people has to be produced.

Hon. Gbolahan Yishawu suggested an overhaul of the constitution while noting that some items on the exclusive list be devolved.

On his part, Hon. Bisi Yusuff noted that Nigeria’s democracy is not a true reflection of the will of the people adding that the constitution was promulgated through a decree.

Supporting the motion, Hon. Desmond Elliot said Nigeria will not progress more than it is now if the constitution is not overhauled.

Other lawmakers who spoke concerning the motion include Hon. Tobun Abiodun, who complained that states are not allowed to manage their resources, and Hon. Kehinde Joseph, who noted the high level of insecurity in the country.

The House also called on the National Assembly to ensure true federalism while it urged Governor Babajide Sanwo-Olu and the government to engage in enlightenment of the people on security consciousness.