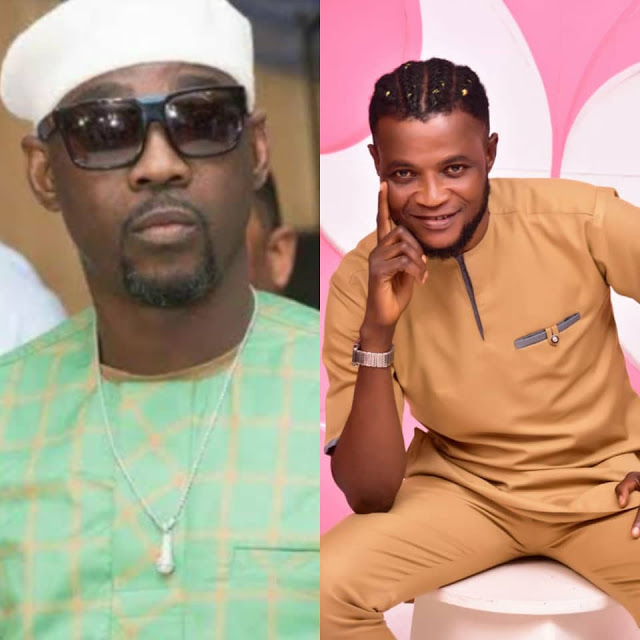 Despite the claim that total peace has finally returned to the circle of fuji musicians, yet the trending issue is the fight some claimed has happened between Alhaji Wasiu Alabi Pasuma and one of his god’s son, Alhaji Abdullahi Alao Abolaji a.k.a Tungba Apasa.

Okanlomo Oga nla was his name and title amongst the followers of the popular fuji giant, Alhaji Wasiu Aabi Pasuma, but now, Tungba Apasa has taken another name, Ojise Nla, and this some claimed did not go down well with the Oga Nla family that is led by Pasuma.

Tungba Apasa to so many out there is a great loyalist of Pasuma wonder, and this has earned him the name Okanlomo Oga Nla. His closeness to Pasuma according to some was well noticed due to the distance he has maintained since he picked another name for himself, Ojise Nla Fuji.

We learnt Tungba Apasa used to attend Pasuma’s show but since the change of name has occurred, his absence has been well noticed and this has contributed to the rumor going round that the duo are no more became well established.

According to a close associate to the fuji star in Ajegunle area of Lagos, he said, “The title Tungba Apasa got from Paso’s camp, Okanlomo was a big position and he is well loved by Alhaji Wasiu Alabi Pasuma. Tungba can never go against Pasuma because he holds him in high esteem and he sees him as a great mentor he has learnt a lot from.”

Reacting to the new position, Ojise Nla Fuji Tungba Apasa now claims, this close associate said, “It is not a strange case amongst fuji acts, Alhaji Wasiu Ayinde was once known as Wasiu Ayinde Barrister and he later changed his name to Ayinde Marshal. Same thing Pasuma did when he used to be called a member of Arabambi family. Then, he took a title, Otunba Arabambi . He was very proud to be associated with the name and to people’s surprise, he announced to all his followers that he wanted to be seen and known as Oga Nla, that he has surpassed the title of Otunba onifuji.

“He said he was old and matured enough to have followers with a name tag, Oga Nla. Pasuma, did this and there was uproar everywhere. People did say he had fallen out with Wasiu Ayinde over a trivial issue and that was why he decided to start doing his things instead of associating himself with the fuji king that had offended him in some ways.

“Now that Tungba Apasa has gotten a new name for himself with followers too across the borders, I think people should stop peddling rumors that he had fallen out with Pasuma. They are still as close as ever. His loyalty to him has not waned, and it has always been one hundred percent, but the young man needs to carve a niche for himself and that he has done.” He concluded.

Tungba Apasa while reacting to the rumor going round said, “I have no issue with my Boss Oga nla, I am now Ojise nla Fuji, a position my Creator wanted for me and my whole fans love this new name and they have all accepted it. Taking up a new name has not severe my ties with Paso, we are still together. My advice for those peddling rumor about a discord that does not exist is to desist, we are one, no fight at all between us. He is my father and I am his beloved son.” He said.

It could be recalled that some of the loyalist that claimed to be with Pasuma have left, amongst them was a popular Islamic singer that had quarrel with one of Pasuma’s band members at an event in Lagos. The Islamic star was attacked in the presence of Pasuma and this has made him leave the Oga Nla family.

Now, that some people were saying Tungba Apasa too has left to found his own family, this they said was not a good one for the Oro born fuji Act, Alhaji Wasiu Alabi Pasuma, despite Tungba Apasa’s claim that all was well between them.

Tungba Apasa to his name has the following albums; Triple A, Crime fighter, Enough is Enough; Askangba; High Rank, Epoch Fuji, Leg over and others.