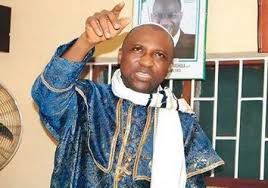 The governor of Zamfara state, Mohammed Bello Matawalle has joined the All progressive congress today as speculations have revealed that he has plans to defect.

Although, He has severally debunked the speculations and reinstate his loyalty to the people democratic party but all that has come to an end today as he officially moved to the ruling party with about 18 governors welcoming him to the party.

Meanwhile, when the governor of Cross rivers state, Ben Ayade defected to APC, A Popular prophet, Primate Elijah Ayodele released a prophetic statement that the Governor of Zamfara and two other governors will follow suit. The man of God specifically mentioned that Zamfara Governor has made up his mind already yet the governor and his aides maintained that He isn’t defecting to the party.
See Primate Ayodele’s full statement below
‘’The Governor of Zamfara State, Bello Mohammed Matawalle has made up his mind to leave the PDP. He is 99 percent out, If the party does not manage its situation well, the Governor of Enugu, Ifeanyi Ugwuanyi, and the Governor of Abia State, Okezie Ikpeazu will follow suit’’

Governor Mohammed Bello has not stated the reasons behind his defection to the APC but PDP members have reacted and shown their displeasure in the latest development.
With this, Primate Ayodele was right with his prophecy, and the people Democratic Party also need to pay attention in order to work on the remaining two governors that Primate Ayodele mentioned.

Already on the social media, pictures of Governor Yahaya Bello and that of Enugu Governor, Okezie Ikpazu has gone viral, creating an impression that the governor might leave PDP soon.

Primate Ayodele no doubt has established his prophetic ministry around so much accuracy. This has made people describe him as a political prophet due to his frequent prophetic statement on the state of the nation yet this has never stopped the global prophet from proving his call with more fulfilled prophecies.