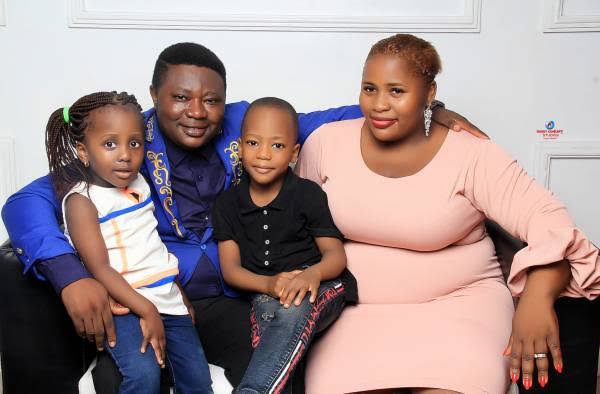 “It’s my prayer that you marry a woman who is a wife and not a knife”, Says pastor Precious Iginla in an emotional laden voice as he opened up on the allegations raised by his wife Blessing Joseph in an interview she granted Chude Jideonwo.

Precious Iginla who is the shepherd in charge of prophetic Fire Embassy International Church Port Harcourt while admitting their marriage has hit the rock stated that His elder brother,  Prophet Joshua Iginla has nothing to do with the brouhaha, rather he was the one who has prevailed on him to sustain the marriage this long.

According to him, at no point did prophet Iginla objected to their marriage from inception as she claimed.

“Despite her low academic qualifications, my family accepted her and my brother even included us as part of his ministry. Immediately we got married, she objected to my working with my brother in the ministry.  When the nagging was much and knowing my weakness that I hate trouble,  she  forced me to leave my brothers flourishing ministry just to please her. That was my biggest regret as things went awry for us. She made me turn my back on my family and even when my parents died, she didn’t attend the burial ceremony of  my father and mother”, Precious claimed.

He also revealed that her cantankerous attitude and waywardness affected the ministry they started together. According to him, during ministry, she will go to the back of the Church and be eating groundnut, she beats up members physically and has caused us to close down the ministry thrice, thus turning herself to a nuisance in the ministry.

” Can you belive it that she will leave the house in the morning without stating where she was going , abandoned the kids with me to cater for them. She won’t bath them nor care about their feeding and schooling.  I do that myself. I wake them up, bath, feed and took them to school myself. She will come back late in the night without remorse? I knew she was cheating on me but  endured all of these for the sake of religion”

Speaking further, Precious Iginla admitted that when he couldnt bear it again, he decided to reconcile with his family and like a prodigal child,  his Elder brother, Prophet Iginla accepted him back and gave him a duplex and a cash of N5 million to start all over.

” Can you imagine amidst all we did to my brother, he forgave us and accepted us back with love and kindness. Shortly after this, this troublesome woman started demanding for too much. Instead of investing the money my brother gave us, she squandered it on frivolous lifestyle. My brother got wind of this and called me to caution me on wasteful spending.  I then decided to sell the duplex and acquired five blocks of flats. We both agreed to this. We decided to live in one and rent out the other four flats to sustain the family,the ministry in Portharcourt and also to be financiallyindependent. Sadly, like a woman possessed, she changed her mind claiming she can’t live in a flat again that we should sell it and relocate to Abuja and life a flamboyant life. My objection to her devilish requests was the beginning of my woes and her attack against my elder brother again”

According to Precious Iginla, she called his elder brother, Prophet Iginla in Abuja that if he fails to give her N3 million for her to leave home and relocate to Abuja, she will fabricate lies against him and tarnished his name.

” I was privy to that call she made to my brother. My brother refused to yield to her cheap blackmails and she started a campaign of calumny against him. She started with a Facebook programme alleging I beat her just to target my family. Do you know at times I will run away from the house in my boxers to avoid her troubles? When that fails she  will come online again saying we have sorted it”

Finally,  on the issue of domestic violence, Pastor Precious denied that saying she fabricated that to get at his family. He claimed he was the victim of her domestic violence. According to him, several times she has torn his clothes to shreds, slapped him and Best him up.

” at a time she packed all my clothes and set them on fire. She told me nobody will believe me when she lied against me on the issue of domestic violence. I am the victim of thr domestic violence not her. She doesn’t care about her obligation as a woman, a wife or a mother. I never denied her access to the kids. She abandoned them and I have never denied her access to them. They are with me in our house at Portharcourt.  Can you belive it they she tried to indoctrinate my son to abuse me as a useless father but he refused. And mind you, I didn’t initiate the divorce,  she did that herself. All she is interested in is being on social media, or being a blogger. You can go to her page and confirm. All she is interested in is trending online and mind you,  am not the target, she wants to ride on the popularity of my brothers fame to trend”

Watch out for an explosive live Video of this interview….