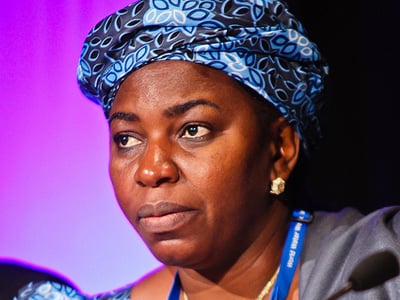 Sarah Ochekpe, a former Minister of Water Resources, has been sentenced to imprisonment by a Federal High Court sitting in Jos over a N450 million money laundering scandal.

Ochekpe, who served as Minister under former President Goodluck Jonathan, was sentenced alongside a former chairman of the People Democratic Party in Plateau state, Raymond Dabo, and the Plateau State Coordinator of Jonathan Campaign Organization, Leo-Sunday Jitong.

The three accused persons had been standing trial since 2018 in a case of money laundering and conspiracy brought against them by the Economic and Financial Crimes Commission (EFCC) amounting to over N450 million.

The trio were convicted and sentenced to six years imprisonment each by Justice H. M. Kurya of the Federal High Court, Jos, Plateau State, on an amended three – count charge bordering on conspiracy and money laundering.

They were alleged to have received the sum of N450million from the bank through cash and wire transfer by some oil companies and former Petroleum Resources Minister, Diezani Alison-Madueke, to influence the outcome of the 2015 presidential election.

Investigation had showed that on 26th March, 2015, the sum of N450million were withdrawn from the Central Bank of Nigeria, CBN, by a new generation bank and it was handed over to the defendants in cash after they signed for collection.

Though the defendants claimed that they handed over the money to late Senator Gyang Pwajok, the Plateau State PDP Governorship candidate in 2015, they however failed to provide any evidence to support the claim.

The defendants were convicted on count one, bordering on conspiracy to accept cash payment above threshold under the Money Laundering Prohibition Act, 2012 (as amended) and sentenced to three (3) years imprisonment with an option of N2,000,000.00 (Two Million Naira) fine each.

On count two, the defendants were convicted and sentenced to three (3) years imprisonment with an option of N2, 000,000 (Two Million Naira) fine each. The sentences are to run consecutively. Visit the EFCC website: www.efccnigeria.org for more details and other stories.