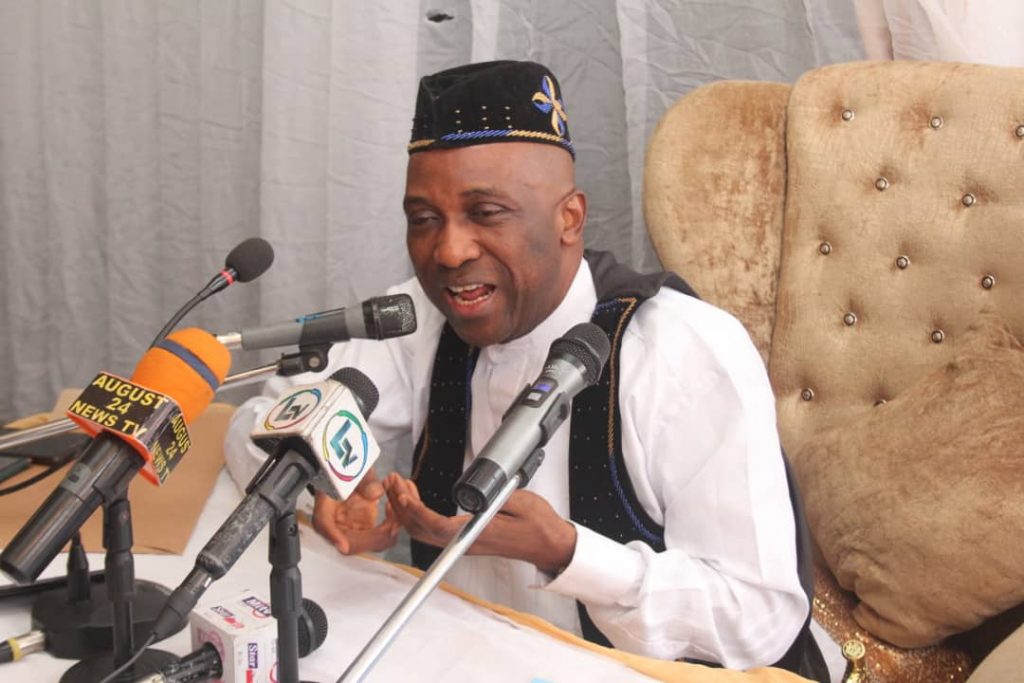 The day was February 14, 2022. Incidentally it was a date set aside all over the world as St.Valentine’s Day. Lovers day. A day meant to share agape love and that was what it was this year at INRI Evangelical Spiritual Church.
But beyond being a thanksgiving day to celebrate  man of God, Primate Elijah Ayodele of the church. The venue was the premises of the church at INRI Prosperity Estate, Primate Ayodele Crescent, INRI bus stop, along Egbe/Ikotun Road, Oke Afa, Ejigbo Isolo.

As expected, the event, which has become an annual ritual witnessed a large crowd not only of the INRI Church members and friends of the celebrator but quality members of the society from all walks of life including journalists, obas, sports administrators, musicians, politicians, businessmen and women and the poorest of the poor among others. In fact, Isolo was on lockdown as a result of the event.

As early as 7am on the appointed date, people have started trooping in to be a part of the event not minding that the day was a Monday, the first day of the week. By 9am all available space in the church has been taken over for an occasion that was scheduled to start by 10 pm; while music, good music was blaring from the public address system so that there was no dull moment.

At exactly 10am the master of ceremony, Mr. Soji Omotayo mounted the expansive podium to introduce himself and his assistant for the day.  Omotayo, a print journalist turned a broadcaster/compare was on top of his game. The very important guests that graced the occasion include the Ooni of Ife,  Oba Adeyeye Enitan Ogunwusi (Ojaja11), who was represented by a first class chief all the way from Ile Ife in Osun state, King Sunny Ade, Pastor Tom Samson who delivered the homily for the day, Lola Abiola-Edewor, Dr. Rafiu Ladipo, President-General of Nigerian Supporters Club, politicians and scores of journalists.

With Pastor Tom Samson was done with the sermon for the Thanksgiving, the real McCoy of the day began and that was the empowerment. Many, ranging from widows, the poor, musicians, journalists were  empowered. They were lifted from poverty to affluence. The homeless were given monetary rewards that will put shelter over their heads.The interesting thing about the empowerment was that even the rich that had impacted in the life of the celebrator were not left out in the empowerment. Scores of journalists were empowered with cash, cars and others  were given tricycles, WAEC/NECO forms, food items, household utensils like refrigerators. You name it, virtually everybody that came went home with something. The beneficiaries cut across tribe, religion and party affiliation. It was an empowerment to mankind.

Same day, a more than 100 kilometers  road build with interlocking stone was launched. The road we were told was single handedly constructed by INRI with no assistant from the government of Lagos State or the local govt of that area at the cost of N100m.

In fact, it was a glorious day to be remembered for ever not only by those that drank from Ayodele’s milk of human but by all who witnessed the event.