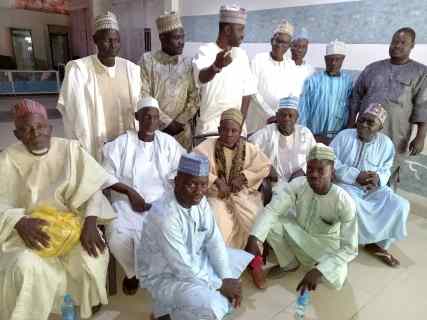 Supporters of the All Progressive Congress (APC) from Maradun local government area of Zamfara state where Governor Bello Mattawale hails from have declared their loyalty to Senator Kabiru Garba Marafa.

The supporters led by the APC stalwarts, Captain Halilu Haliru (RTD) and a former Director General in the state’s civil service, Malam Sale ST, said, they decided to dump Governor Matawalle as a result of his poor performance as a Governor.

The decamping team was received by a chieftain of Senator Marafa faction of the APC, Hon. Bello Bakyasuwa.

Bakyasuwa is also from Governor Matawalle’s local government area and serves as the Publicity Secretary of Senator Marafa’s faction of the APC.

He received the decamping team on behalf Senator Marafa’s factional chairman, Alhaji Sirajo Maikatako at the faction’s secretariat in Gusau.

Speaking at the occasion, the group said, they were inspired by the patriotism and sincerity of Senator Marafa which is the complete opposite of their kinsman, Governor Matawalle, who made thousands of unfulfilled promises to their Local Government and the state.

They described Matawalle as not representing their people very well as such, they promised to support Senator Marafa in bringing the desired positive leadership to the state.

The leader of the group, Captain Halilu (rtd) said, “We are aware of the contributions of Senator Marafa to the development of his constituency as a Senator of the Federal Republic of Nigeria”.

“The motions he moved that provided support to the state in the Early days of security concerns and the job opportunities he provided to thousands of people in the Federal Civil service”.

They observed that Governor Matawalle did not do anything close to that in his legislative time and executive position as a Governor.

They added that “there is nothing in Maradun to show that its son is the Governor today”.

They reiterated that they were supporting Senator Marafa even as Governor Matawalle’s camp made deliberate advances to buy their conscience.

They said taking Matawalle’s money to buy their support means supporting the worsening security situation and absence of development in Maradun Local Government which has impoverished lives especially in rural communities.

In his speech, Honourable Bello Bakyasuwa used the opportunity to appreciate the APC Stalwarts from Maradun for their courageous move and assured that Senator Marafa would continue doing everything possible to justify their confidence reposed in him