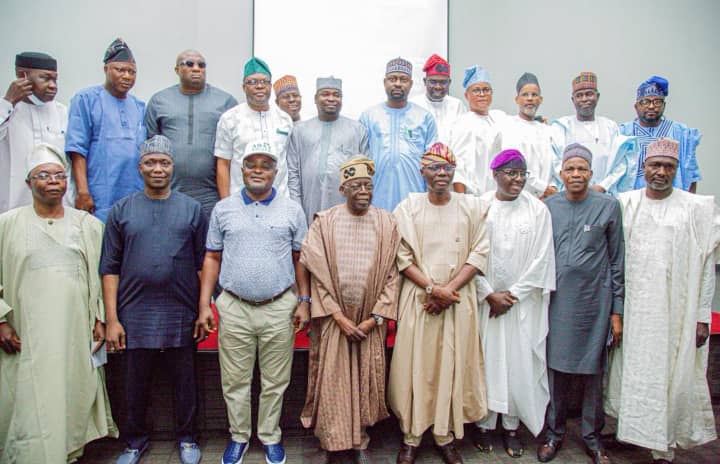 The National Leader of the All Progressives Congress (APC), Asiwaju Bola Ahmed Tinubu, has declared that Nigeria needs a courageous leader to urgently meet the desire of citizens for drastic solutions to the challenges facing the country.

Tinubu also described himself as the most qualified for the position of President in 2023 adding that his aspiration is for a nation that would not be an index of poverty.

The presidential aspirant said this at a one-day parley held for serving Speakers and former Speakers and deputies held in Lagos with the theme: The Legislature, Changing Times and Nigeria’s Democratic Journey.

“We have the brilliance, the resources, the focus. We don’t just know how to run the race and take care of the gear of progress,” Tinubu said at the event hosted by the Speaker of the Lagos State House of Assembly, Rt. Hon. Mudashiru Obasa.

Tinubu further described himself as brilliant, courageous and sound enough to know the solutions to Nigeria’s problems adding: “Just as I need Nigeria, Nigeria needs me.”

Noting his can-do attitude, he recalled how he changed the fortunes of Lagos when he became governor of the State at a time of its challenge.

“In the face of tyranny, I have survived, struggled for democracy, I have endured the bush path, lived without a family, spent resources.

“To make Nigeria one is a task and who could do it? I am one. I am the first governor to grant autonomy to the House of Assembly. I survived non-allocation of local government funds. We didn’t suffer, we didn’t retrench. We made progress out of adversity.

“I inherited N600m as Internally Generated Revenue (IGR) with zero allocation from Federal Accounte Allocation Committee (FAAC). But we survived and today, Lagos is number one economy.

“That is why I am begging you to do me a favour so that I can do Nigeria a favour.

“It is a very challenging time for us in the country and we have to get it right. We need to intellectually interogate ourselves.

“I am the first governor to bring Independent Power Project (IPP) to Nigeria. It was 300 megawatts. If they had followed my advice then, Nigeria will not be facing epileptic power supplies,” he said recalling how he brought major investors to Nigeria and promising that he is ready to do it again.

Tinubu also said he believed in religious tolerance and women’s participation in politics.

Governor Babajide Sanwo-Olu, who was a guest of honour at the parley, described Tinubu as his mentor and benefactor.

He also urged the legislators to key into the desire to make Nigeria a better country with Tinubu as President.

Speaking with his colleagues, Dr. Obasa described Tinubu as a true democrat.

“I am standing here before you because Asiwaju is a talent hunter. He is someone that would support you, raise you to a point of leadership and give you room to excel.

“I can confirm that he is the brain behind the legislative autonomy that we enjoy today at the Lagos State House of Assembly and he did this far before the clamour for it by other states.

“So we can see that he is a person that will support the legislative arm of government to remain strong. Dear colleagues, let us all stand with him and support him,” he said.