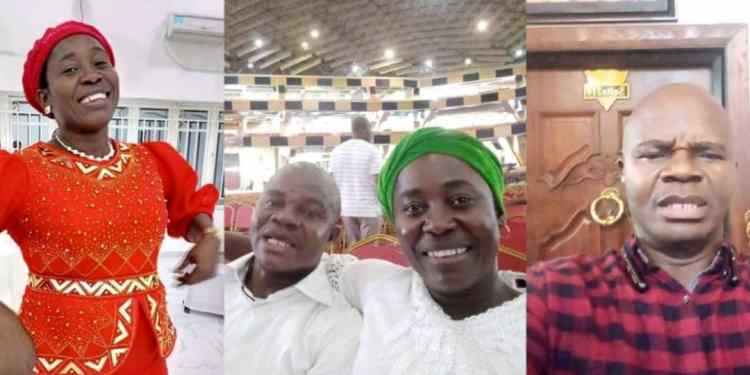 Osinachi’s husband is shown on video beating her. Truth can be accessed below.

This online news platform has learnt that an alleged viral video of Osinachi’s husband beating her surfaced on Wednesday, April 13, 2022, after some Nigerians misinterpreted a 3-year video clip of a man hitting his wife with a pressing iron to suggest that it was Peter Nwachukwu who was allegedly beating his late wife, Sister Osinachi Nwachukwu, who reportedly suffered domestic violence before her death.

www.giraffeglobal.com.ng understands that Sister Osinachi Nwachukwu died on Friday evening, April 8, 2022, in a hospital located in Abuja, Nigeria’s capital. The “Ekwueme” crooner passed on this evening in an Abuja hospital after battling an undisclosed ailment for the past few months. Osinachi Nwachukwu was said to be diagnosed with a deadly ailment and has been bating it for some time now.

He said, “If what I hear about domestic abuse is anything to go by, then I hereby endorse the call for the arrest of the husband of Osinachi immediately for questioning.”

A woman, who claimed to be her friend, Chidinma Ezego, alleged that the late Osinachi told her the husband made her children flog her.

She said, “The husband has been beating and maltreating this woman, but she’s been dying in silence. Now, he kicked the woman on her chest and she’s been on life support for five days and finally died. Now, the man has been arrested and I pray he rots in jail. Remember how he tied her up and asked the children to beat her up with a cane. She told me this.”

Osinachi Husband, Peter Nwachukwu, Tells His Side Of The Story
While speaking from police detention, Osinachi’s husband stated that his late wife had been ill since November of last year. He claimed he took her to Federal Medical Center (FMC), Gwagwalada General Hospital, and ultimately National Hospital, where she died. He did not, however, reveal the nature of her sickness.

Peter Nwachukwu was handcuffed and escorted into the police van stationed in front of the Lugbe police station in Abuja at 11 a.m. on Monday, April 11, 2021.

The Nigerian Police Force (NPF) said they were driving him to their home to offer proof of the hospitals he claimed he took his deceased wife to for treatment.

Video of Osinachi husband beating her …Here is the truth
https://youtu.be/gzj7mJYq-SM

the video above titled: “Video of Osinachi husband beating her, recorded by their son” is fake and that of Peter Nwachukwu and his late wife Osinachi Nwachukwu.

On this note, we can report that the supposed video of Osinachi’s husband beating her which has gone viral on the micro-blogging site, Twitter, first emerged on the internet three years ago and is that of Peter Nwachukwu and his late wife