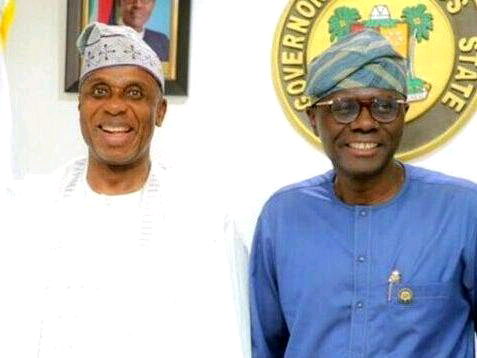 The Minister of Transportation and a presidential aspirant in the forthcoming 2023 general polls on the platform of All Progressives Congress, APC, Rotimi Amaechi has said that the National Leader of the party, Bola Tinubu, is eminently qualified to be Nigeria’s next president in 2023.

This happened as Lagos State Governor, Babajide Sanwo-Olu, restated his unalloyed support for Tinubu’s presidential ambition, saying, the National Leader will continue to be a rallying point for him and the people of the state.

The duo made the remarks on Thursday night, when the latter received the former during a courtesy visit to him at Lagos House, Marina.

Tinubu, a former Lagos State Governor, and Amaechi are presidential aspirants on the platform of APC.

Sanwo-Olu, in his address, expressed best wishes in Amaechi’s presidential ambition as well, saying, though, he is also eminently qualified for the top job.

The governor, however, told his guest, that he is a “direct beneficiary” of Tinubu’s leadership, and as such, the state will support him to become Nigeria’s next president.

According to Sanwo-Olu, “I have sheer regard and respect for our leader, Asiwaju Ahmed Tinubu. I have been a direct beneficiary of his leadership. I have been part of his cabinet

“I continue to tow that line of leadership and what he stands for.

“I want to say to you that you’re eminently qualified and I want to wish you well in this journey. Clearly, for all of us in Lagos State, Asiwaju continues to be our rallying point, but the country is our country and we must continue to see it as the indivisible one and the one that we all rally around.

“I certainly know too well what your pedigree is and what you have done.”

In his reaction, Ameachi acknowledged that it took a lot of courage to visit Lagos because he recognises Tinubu’s influence on the state.

His words: “It is a difficult thing to even come here because we already know that our leader comes from Lagos state. And you come from that family of our leader.

“We know that our leader is eminently qualified to rule this country. He has led Lagos state.”

Recall that on April 9, 2022, Amaechi, dramatically declared his intention to run for the office of president, describing his decision as a “moral duty to give what I can in the service of my country”