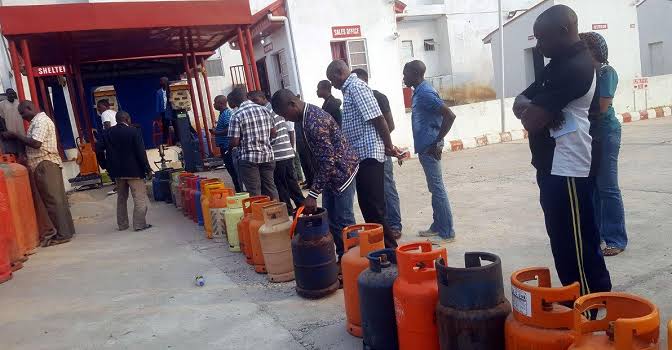 Demand for Liquefied Natural Gas (LPG) popularly known as cooking gas dropped to a record low across the country.
Market report gathered on Tuesday showed that consumers had lately either reduced consumption or ditched the commodity for cheaper alternatives such as coal and firewood.

This brings to fore, the achievement of President Buhari’s National Gas Expansion Programme which seeks to deepen local gas usage within the next decade.

Executive Secretary, Nigerian Association of Liquefied Petroleum Gas Marketers, NALPGAM, Bassey Essien, confirmed during a phone interview that the drop in consumption rate was due to increasing prices.

According to him, price of 20 metric tons of cooking gas as of Tuesday shot up from N12mn to N12.8mn.

“Prices have been volatile for a while, and it’s because the purchasing power has dropped. Gas is no longer affordable, and buyers are either regulating use or found alternatives. As at today, a 20-metric-ton of gas sells for about N12.8mn. Price has hovered around 10mn-12mn before now. Just imagine what we bought last for N12mn rising by N800, 000 for one truck,” he Said.

While speaking during one of the technical sessions on the topic, ‘Gas as a catalyst for sustainable economic development- The role of Nigerian Content’, at ‘The Nigerian Content Midstream and Downstream Oil and Gas Summit 2022’ organised by the Nigerian Content and Development Monitoring Board, NCDMB in Lagos on Tuesday, gas stakeholders unanimously agreed that national gas consumption was currently very low. They expressed worry over the dwindling purchasing power of Nigerians. They, however, did not state what current actual consumption or demand was when compared to figures already quoted by Ubong.

The MD/CEO, TECNO Gas Ltd, Nkechi Obi, during the panel session, said gas pricing was one of the reasons for low demand across the country.

“Currently, gas demand is getting very, very low across the country, and this is due to high gas pricing”, she said, adding that lack of government policy to drive demand also formed part of the reason demand was abysmally low.

She urged the Federal Government to intervene in terms of formulation of policy and funding to drive up demand, adding that gas was a developmental commodity.

Findings showed that between 55-60 percent of gas utilised in Nigeria is currently being imported by independent marketers, while the Nigerian Liquefied Natural Gas Limited (NLNG) supplies just 40 percent.

Nigeria has been described as a gas country with approximately 207 trillion cubic feet (Tcf) of proven gas reserves, ranking 9th in the world and accounting for about 3 per cent of the world’s total natural gas reserves of 6,923 Tcf. Nigeria has proven reserves equivalent to 306.3 times its annual consumption.

Natural gas is estimated as the fastest growing fossil fuel in the world, and is projected to overtake coal by 2030, as the second largest source of energy.

The Federal Government said in April,that the value of Nigeria’s proven gas reserves of about 206.53 trillion cubic feet was over $803.4tn.

Ubong said Nigeria needed to deepen domestic production of gas to bring down prices and increase local consumption, adding that affordability was being threatened.

“When gas is imported, then, international pricing will also apply because you will have to add freight charges and import duty to the price. All these added together will definitely push prices up. You will also need to factor in the issue of FOREX. Getting Forex to import products is also very scarce”, he said.

A March 2022 LPG, Propane and LNG supplies- its latest report obtained from the Nigerian Midstream and Downstream Petroleum Regulatory Authority (NMDPRA) – puts local supplies for the month at approximately 67, 000 metric tons (MT), while total for both import and local was put at approximately 129, 000 metric tons. Local supply for February was put at 47, 000MT, but total local and import supply was put at 77,000MT.

The National Bureau of Statistics, NBS, said in its latest report that the average price for refilling a 5kg cylinder of cooking gas stood at N3800 in April 2022, from N3778 recorded in March 2022, showing an increase of 0.59 percent month-on-month.

However, on a year-on-year basis, the average retail price for the product increased by 83.67 percent from N2069 in April 2021.

According to state profile analysis, the highest average price for refilling a 5kg cylinder of cooking gas was recorded in Gombe with N4337.50, followed by Bayelsa with N4250.00 and Adamawa with N4220.00.

On the other hand, Yobe recorded the lowest average price with N2931.83. This was followed by Sokoto and Zamfara with N3000 and N3250 respectively.

Similarly, on a year-on-year basis, the average retail price for refilling a 12.5kg cooking gas increased by 89 percent from N4318 in April 2021.

The North-East Zone recorded the lowest price with N7559.