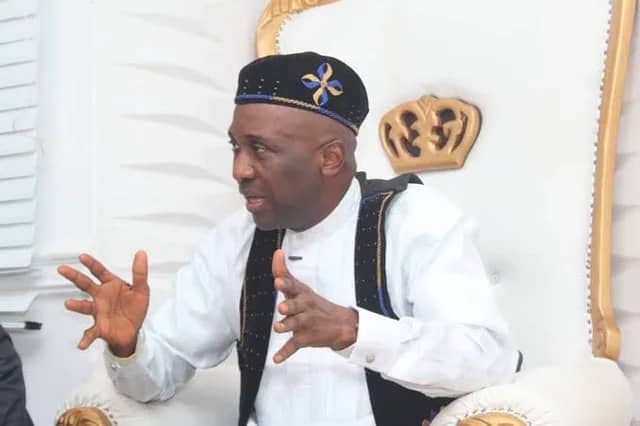 As a result of this clamours, terrorist group, IPOB was birthed with a mission to disembark the Igbos from Nigeria if they fail to get the presidency in 2023. The founder of the group, Nnamdi Kanu has been arrested ever since the organization started cursing crisis in the country.

Since IPOB failed, popular politicians from the south east zone joined the ruling party; All Progressive Congress in order to get a chance at the presidency in 2023 since it’s very likely that the ruling party retains the seat of the presidency coupled with the fact that President Muhammadu Buhari will not be contesting again.

The clamour for the South East presidency became stronger when they joined the ruling party, and even other Igbo politicians at opposition parties pushed for the South east presidency but in the midst of these clamours, a popular prophet, Primate Elijah Ayodele in May 2021 categorically stated that the Igbos cannot produce the next president of Nigeria in 2023.

‘’ ….So I am telling you that the 2023 presidency will elude the Igbo, mark my words; if they are looking for the presidency maybe they will wait for another time. The pendulum is not swinging towards the Igbos.’’ (https://dailypost.ng/2021/05/07/2023-presidency-will-elude-ndigbo-primate-ayodele/)

Again in October 2021, Primate Ayodele reinstated his prophecy on presidency eluding igbos, and adding that the south east politicians will betray each other and not get presidency in 2023.

‘’Don’t blame any group for the killings in the South-East, rather blame bad governance. The South East political leaders are betrayals of trust, that’s why they won’t get the presidency.’’ (https://dailypost.ng/2021/10/11/2023-southeast-wont-get-presidency-igbo-politicians-are-betrayals-primate-ayodele/)

Later in April 2022, Primate Ayodele spoke about the issue of Igbo Presidency and stated that the igbos deserve to produce the next president of Nigeria for peace to reign in the country but there is no south east politician that is fit for the seat. He then mentioned that if they don’t work together and allow the presidency to elude them in 2023, they will forever live to regret it.

‘’Sincerely, without mincing words, the next president should come from Igbo, it’s just unfortunate that they are not that serious with their intentions because there is a political force struggling with it which they need to claim otherwise if it eludes them now, Igbo will never see presidency till kingdom comes.Igbo must wake up now, otherwise, they will betray themselves from producing the next president of Nigeria. The South and North should step down for Igbo, let them be used as consensus candidates. This can happen if the Igbo know what they want but do they really know what they want? Are they ready for it? I don’t think so.’’ (https://pmnewsnigeria.com/2022/04/10/igbo-presidency-is-now-or-never-primate-ayodele-declares/)

As it stands now, all hopes to get the south east presidency seems to be getting lost as the day goes by. Primate Ayodele spoke about betrayal of trust among Igbo politicians last year. This was obviously mirrored when Orji Uzor Kalu, a foremost aspirant for Igbo presidency stepped down to support senate president, Ahmed Lawan who is a northerner knowing fully well that the Igbos need and deserves the presidential seat.

Another hope of the Igbos in the ruling party is Senator Rochas Okorocha who bought the presidential form under the APC, with the hope that he would be screened on Sunday, 29th of May, 2022 but unfortunately, he was arrested by the EFCC two days ago and will be in their custody till Monday, which means he has automatically being screened out of the race.

In the opposition party, Peter Obi seem to be the voice of the Igbos in the race, he bought the PDP form and has gotten several supporters ever since. Suddenly, he resigned from the PDP yesterday and from the presidential race, hoping to go to another party to pursue his ambition.

It is a known fact that PDP is still the strongest opposition in the country, if anyone is to contest an election against the ruling party, it has to be PDP but Peter Obi left there, ruling out his chances in the presidential race.