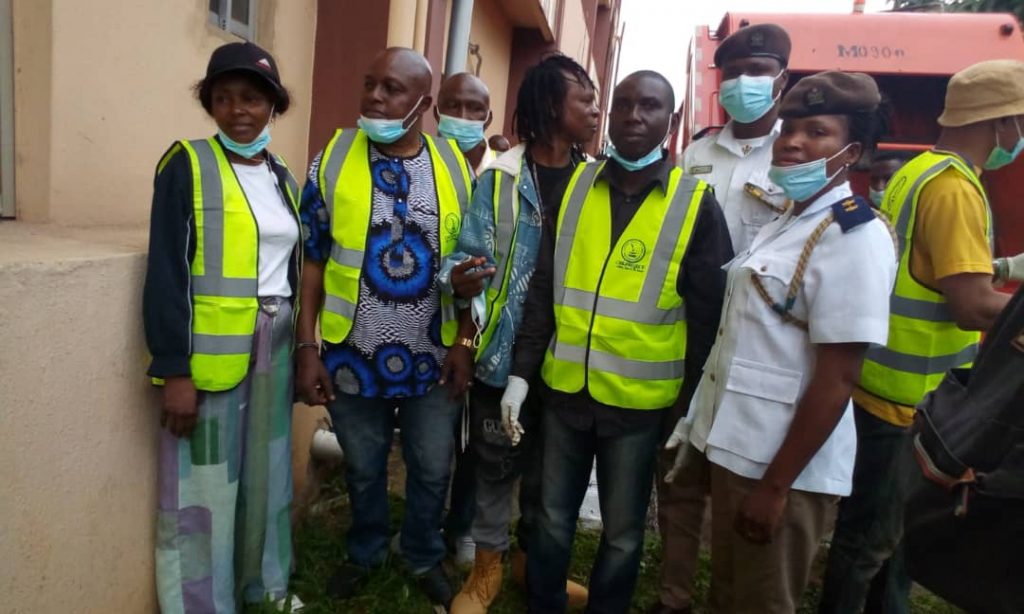 Sequel to the Clean Up Lagos partnership agreement between the Celebrity Journal Publishers Association of Nigeria ( CJPAN) and The Lagos Waste Management Authority (LAWMA),
the maiden edition of the environmental sanitation exercise kicked off at Agege Local government in Lagos, Nigeria on Thursday..

CJPAN led by the President Mr. Joshua Uloko and other members of the executives commenced the cleaning exercise around 9am in front of the Agege Local government road..

The CJPAN’s brand ambassadors of the exercise, popular celebrities, Nollywood actor, Mr.Hakeem Raman and Reggae Musician, King Wadada were on ground and of course, the management of LAWMA, led by Mr.Tunde live up to the expectation and came to the venue with a new branded truck to conveying the waste to dumping site.

Consequently, Heath officials of Agege Local government equally on ground to monitor the exercise.
According to the President, Mr.Joshua Uloko revealed that CJPAN partnered with the LAWMA to compliment the effort to make Lagos clean to avoid deadly disease according to the report, Lagos community in the recent time battles with indiscriminate waste dumping due to estimated 14,000 metric tones waste daily since His Excellency has ordered zero tolerance for reckless waste disosal and environmental abuse.
He noted that the exercise is part of Coporate Social Responsibility of the CJPAN and at the same time identifying with the LAWMA workers who ensured that the street of Lagos is cleaned on daily basis.

Mr. Uloko said that the exercise will come up every month and will move to other local governments in the state.

A member of the executives, and financial secretary of the Association, Mr. John Thompson lauded the effort of the LAWMA management for mobilizing their people to the venue and for their upstanding in keeping Lagos clean.
He tasks members of CJPAN not to relent on the exercise while asking the corporate organizations and banks to partner with us..Cleaning business is a collective efforts..He said
The exercise ended around 2pm.