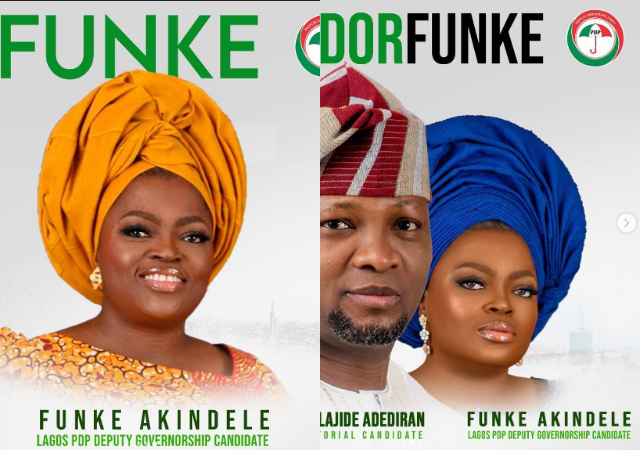 Nollywood actress, Funke Akindele has finally dropped her husband’s surname, “Bello” as she delves into politics.
The actress is fully embracing her maiden name following separation from her estranged husband.

Funke Akindele unveiled her political posters and what caught the attention of Giraffeglobal magazine is the change of name.

It is surprising to know that none of the posters bore her husband’s surname, “Bello”.
This latest move just proves that the estranged couple have no hope of reconciling.

This new development is coming hours after Funke Akindele announced her governorship interest in Lagos State.
The “Jenifa Diary” actress further revealed that she is putting her acting career on hold to focus on her political career.

Akindele earlier spoke of her political ambition and reiterated her commitment to bettering youth welfare.
“When the PDP gubernatorial candidate asked me to be his running mate, I saw it as an opportunity to help liberate and improve the welfare of our people, particularly the deprived youth, women, and the girl child,” she said.
“My decision is not only to accept this huge responsibility but also to work tirelessly and complement Jandor’s burning desire.
“Over the years, a lot of young people have been ignored, victimised, and maimed for daring to have a dream.
“I use this opportunity to call out all well-meaning residents of Lagos. It’s indeed time to use our numeric strength to our full advantage.”