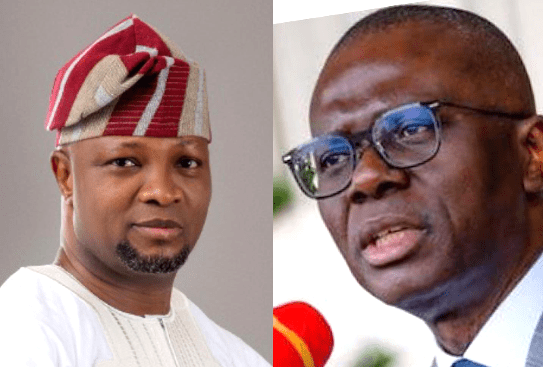 In scathing remarks on Monday, Adeniran condemned the governor’s comment against his capacity to lead.

In an interview, Sanwo-Olu declared that Jandor was not experienced enough to govern Nigeria’s top commercial hub.

The governor mocked his opponent on Channels Television’s Sunday Politics, saying Lagos is not a firm.

The Lagos helmsman described the city as the heart of the country, with an informed audience.

“You need to ask the candidate of the other party what his experience is. Does he have real knowledge of governance?

“Let’s take a tour around the state. What we have done is there to speak. In the space of three years, we have been able to put many things in place.

“So you can’t compare someone with real experience of governance with a person without it”, he said.

In reply, Jandor tore into Sanwo-Olu, calling him a failure whose “entire career” was made possible by powerful politicians.

“He has failed and we have suffered for it. It’s time for a new perspective, it is time for a breath of fresh air in Lagos”, the PDP flagbearer’s statement reads.

Jandor said he was not surprised that the All Progressives Candidate (APC) candidate discredited his achievements and questioned his competence.

The former pressman noted that Sanwo-Olu was not in a position to assess him because “he has never had to build a business from the ground up in Lagos”.

“His entire career has been possible, thanks to the interventions of powerful patrons so he cannot possibly understand why anyone would consider being an independent entrepreneur.

The PDP chieftain told the public that Lagos is being led “by a leader who thinks it is a joke to build and sustain a business”.

Jandor recalled resigning from his role as a broadcast journalist with Lagos Television and a state house correspondent to float his media business.

“In six short years, I built my idea into a media corporation and became the youngest Nigerian to float a television station at age 37”

“I was inducted as a member of the prestigious Broadcasting Organization of Nigeria BON and became a peer of respected media entrepreneurs.

“I have diversified beyond the media, building four other successful businesses in various sectors without any exposure from any Nigerian bank.”

Jandor recalled that he was one of the outspoken party members when he was in the APC, demanding a more transparent government.

“Considering our good governor abdicated his responsibilities in the middle of serious floods in Lagos to chaperone his ailing principal during the APC campaign tours, I doubt he can say the same.

“In February 2019, a brave young woman, Derin Odugbesan asked Sanwo-Olu a pointed question during the 2019 Social Media Week about the promises he made if he was elected governor.

It was during an election campaign like this one and many accused her of being disrespectful to the governor. They swore he was going to surprise her and all Lagosians and transform the state.

“The only surprise he has managed is in how utterly he has failed to honour his campaign promises, despite being handed over a 1 trillion naira economy. Isn’t it audacious despite his well-documented failures as governor to speak ill of my hard-earned achievement as a young man?

“Considering he has no regard for entrepreneurs or appreciation for our achievements, is it any wonder that he grew Lagos’s domestic debt stock from N507.38 billion recorded as of March 2021 to N780.48 billion in March 2022.

“Can someone who borrowed N273.1 billion naira on behalf of the state in one year with nothing to show for it, appreciate what it means to create revenue, employment opportunities and positive growth without assistance?.”

The statement said it was high time “career politicians like Sanwo-Olu who have fed fat from the system and no longer have any regard for hard work”, were voted out.