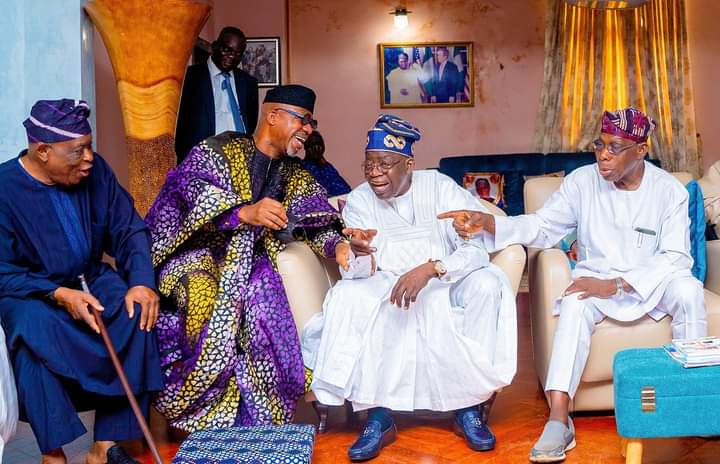 Tinubu arrived the penthouse of the Olusegun Obasanjo Presidential Library, Okemosan, Abeokuta, the Ogun State capital, in his chopper at about 1pm.

He was received by Governor Dapo Abiodun, former Governor Gbenga Daniel, his predecessor, Segun Osoba and other Ogun government functionaries.

They have since gone into a meeting with the Balogun Owu.

This medium reports that the duo of Tinubu and Obasanjo have not been in the same accord politically.

The first time the former Lagos State Governor visited Obasanjo after they both left office was in the buildup to the 2015 presidential election, when he escorted the then APC candidate, Muhammadu Buhari to Obasanjo’s residence.

He was also at the 78th birthday of the former President held at Abeokuta in March, 2015.

The two of them have since kept their distance as Obasanjo withdrew his support for President Buhari and the APC, which he supported to power by tearing his card as a member of the Peoples Democratic Party (PDP).

It would be recalled that Tinubu had a running battle with Obasanjo when they were Governor and President respectively.

Obasanjo, for several months, withheld the monthly allocations of local governments in Lagos State because Tinubu insisted on creating local council development areas in the state.

In an effort to get the funds, Tinubu had dragged Obasanjo and the Federal Government to court.

However, the late Umar Yar’adua administration reportedly paid off the funds to the Lagos State Government.

At his 78th birthday in 2015, Tinubu had recalled how he was sent out of Aso Rock by Obasanjo when he paid him a visit.

“I went to the (Aso Rock) Villa, the President, Olusegun Obasanjo, asked me to walk out and was just abusing me in the papers and I said, “Baba, you are a tenant here. This house belongs to Nigeria. If I get to Ota, you can send me out. I brought file about Nigeria. And he said that is true, sit down,” Tinubu spoke of the frosty relationship between him and Obasanjo from 1999 to 2007.

Tinubu is billed to also host the APC faithful at the MKO Abiola Stadium after his meeting with Obasanjo.