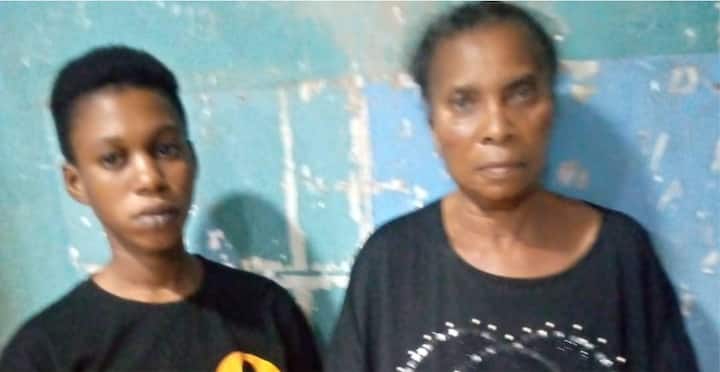 Christiana D’ivoire Iyama, the leader hires men to sleep with the girls and impregnate them in the process

In what can be described as another wickedness from one human to the other, two women, have been arrested for operating a baby factory in Ogun state.

The arrested women have been identified as Christiana D’ivoire Iyama and Margaret Ogwu.They were arrested by men of Ogun State Police Command, Nationnewslead reports.

According to the command’s spokesman, SP Abimbola Oyeyemi in a press statement made available to newsmen in Abeokuta, the suspects were arrested following an information received by police at Agbado divisional headquarters.

“Upon the information, the DPO Agbado division, SP Awoniyi Adekunle mobilized his detectives to the area where the said Christiana D’ivoire Iyama and Margaret Ogwu were arrested.

“Preliminary investigation revealed that Margaret Ogwu was one the girls harboured by Christiana D’ivoire who employed the service of a man to impregnate her and collected the child on delivery, which she sold at the rate of N400,000 to one of her customers.”

Oyeyemi added that the suspect also confessed to the police that, she had sold up to three children from different women to her different customers.

Meanwhile, a baby factory in a detention camp in the Ikotun area of Lagos, has been uncovered by the police command in the state after weeks of close monitoring and utilisation of intelligence reports.

Police officers also rescued 19 pregnant girls (between the ages of 15 and 28 years) and a day-old-baby. The policemen were able to arrest the care givers, nurse to the captors and the operators of the hotels in which the pregnant girls were hidden, Channels TV reports.

Narrating her bitter experience, Hope Bright, one of the captive girls, from Rivers, whose two-year-old child was taken from her, said: “As I reached there, the woman checked me. Suddenly, my stomach started kicking me. Continue Reading