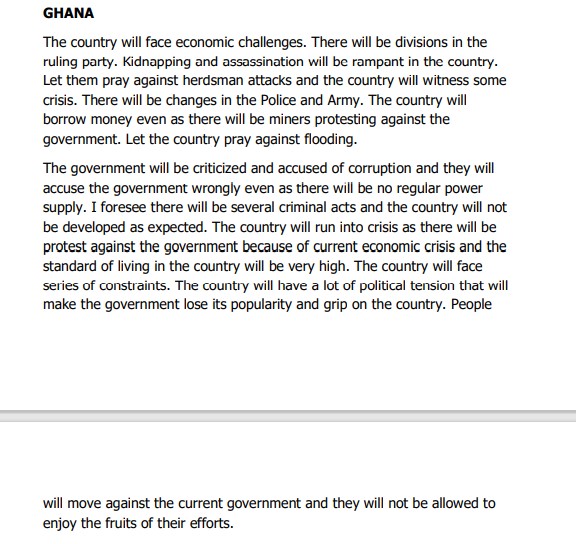 The Leader Of INRI Evangelical Spiritual Church, Primate Elijah Ayodele has taken over the prophetic ministry with release of daily prophecies and immediate fulfilment of them.

He has just recorded more fulfilment of prophecies in Ghana, United Kingdom, South Africa in addition to the thousands of confirmed prophecies to his credit.

Ghana is currently passing through serious hard times in terms of economy and climatic condition. The country is in serious debt and is currently experiencing flooding which has displaced several citizens.

Primate Ayodele in his annual book of prophecy titled Warnings To The Nations (2022/2023 edition) stated that Ghana will face serious economic challenges. He noted that the country will borrow a lot of money from other countries which simply means there won’t be so much in the country’s treasury. He also made it known that the country needs to pray against flooding. With all that is happening in the country, it is obvious that Primate Ayodele’s prophecy has been fulfilled.

In the United Kingdom, the national grid operators have warned that the country is likely to face a three-hour blackout due to shortage of gas. Primate Ayodele in WTN 2022/2023 edition gave some series of warnings to the UK. He mentioned in the warning that there will be a new prime minister in the country and that Queen Elizabeth needs to be prayed for because he foresees her health failing. He also noted that the UK will face economic shake-up, these have all happened. Another part of his warning to the UK that has just been fulfilled is the announcement by the national grid that there is likely to be a three-hour blackout. Primate Ayodele categorically warned in his book that the country needs to be careful against having blackouts.

In South Africa, the current president, Cyril Ramophosa has just released Jacob Zuma, a former president of the country after he was arrested last year. Meanwhile, Primate Ayodele warned President Cyril last month that he should be careful with the issue of Jacob Zuma because it will boomerang and cause political problems.

‘’In South Africa, President Cyril must be careful with Jacob Zuma’s issue, he should not give him political problems because it will boomerang. He must be careful against steps that will bring disorderliness and troubles’’ (https://theeagleonline.com.ng/primate-ayodele-sends-prophetic-warnings-to-sudan-equatorial-guinea-sao-tome-malawi-others/)

With the release of Jacob Zuma by the president, it’s obvious he listened to the prophecy of Primate Ayodele.