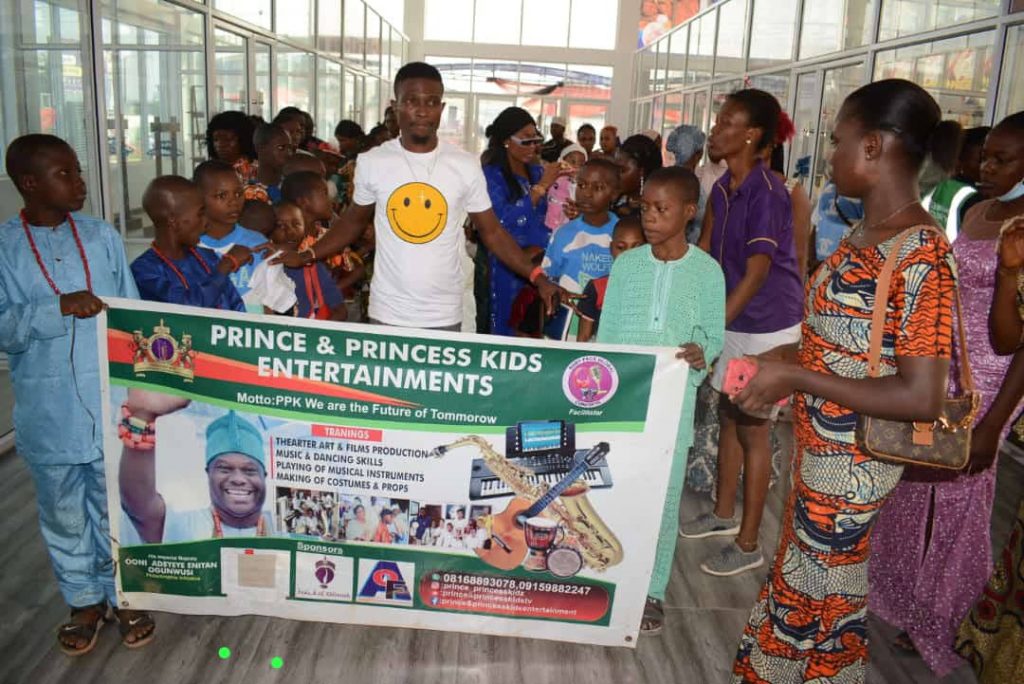 This time, she has vehemently proven that magnanimity will always remain inevitable in her traits. She is a committed giver, a passionate humanitarian and a relentless benefactor to many. Recently, the Chairman/CEO of Fisolak Global Resources Limited lavished millions of naira on hundreds of children in Ile-Ife, enabling them to gallantly do their shopping at the highbrow Ojaja Moore Shopping Mall in Ibadan Road, Ife.

The extremely excited kids were given royal treatment by workers of the mall and this brought quite a huge joy and happiness into their hearts. It was an indelible moment the children felt proud to be associated with the majestic stool of His Imperial Majesty Adeyeye Enitan Ogunwusi Ojaja II, the Ooni of Ife and the grand mayoress herself, Iyalaje Oodua Toyin Kolade.

Highlighting further on the development, coordinator oof Oodua Princes and Princesses Kids’ Initiative, Ogunyemi Duduyemi popularly known as Babyface narrated that the foundation was created in 2016 to cater for all necessary needs of poor children both male and female in Yorubaland. According to him, the Arole Oodua Ooni Ogunwusi has always been rendering his support to the initiative and with the coming on board of philanthropic amazon, Amb. Princess Dr. Toyin Kolade, the foundation has been getting the best of fatherly and motherly support from both the Ooni and the Iyalaje Oodua.

Stressing further, Duduyemi affirmed that Iyalaje Oodua took over the foundation as it’s matron and Chief Sponsor on February 2021 during the First Aje Festival held in Ile-Ife. Princess Kolade, has through her Iyalaje Oodua Foundation ensured that the lofty dreams of the founders of Oodua Princes and Princesses Kids’ Initiative is achieved by contributing immensely to the children’s upliftment and growth.

Teaming up with Iyalaje Toyin Kolade are Prince Babatunde Adedamola Awodola foundation, Mrs. Adunni Oladosu Foundation and Aare Dotun Hassan’s Omoluabi Yoruba Council Worldwide. These are iconic humanitarians who are concomitantly working with the Iyalaje to better the lots of these children.

This gigantic gesture of Iyalaje Oodua Worldwide, Amb. Princess Dr. Toyin Kolade is a pointer to the fact that she is and will never be tired of putting smiles on the faces of the downtrodden, the impoverished and the underprivileged members of the Yoruba world and beyond.

The foundation is formed basically to train kids on various forms of arts and culture spanning music, dancing choreography, costumes and props. They are also groomed on musical instruments like keyboard, guitar, drumsets, trumpet, sax and more. The Initiative also support the kids through acquisition of educational scholarship for them.