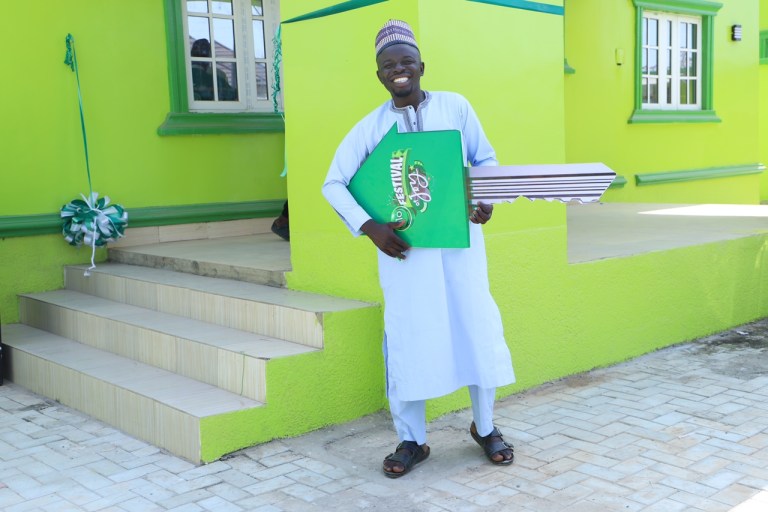 For Ridwan Ajamu Bello, it was safer to hide from officials of Globacom
who kept calling him to come to the Glo office in Abuja on Thursday, January 19, after his number popped up as winner of a 3-Bedroom
apartment in the ongoing Festival of Joy promo.

All that was going through his mind was that the calls were being made
to scam him as it felt too good to believe he had become an instant landlord courtesy of Globacom. So, he opted to stay away from going to
the Glo office where he was asked to go.

After about three hours, he eventually got to the Gloworld, Aminu Kano
Crescent, and spent some time apologizing to everyone for keeping them
waiting.

See also Glo-Sponsored African Voices Features International Fashion Icons
Said he: “Please forgive me. At first it was difficult to believe. You know how these days we have a lot of people claiming to be what they are not, all kinds of scam calls. But when I started getting calls from different people from Glo and then the NCC and NLRC people also speaking and asking me to come to Glo office, I now thought that this could actually be my lucky day. I thank Glo for this opportunity; it’s beyond what I can express”.

Officials of the Nigerian Communications Commission (NCC) and the National Lottery Regulatory Commission (NLRC) had joined Glo officials
to convince the 28-year-old Mathematics graduate of Ekiti State University that he had indeed won a house in the Glo promo.

On Friday, January 20, Bello was at the location of the house at Galadimawa area of Abuja, accompanied by friends and family members, to receive the keys of his house, hence joining scores of other Glo subscribers who have emerged winners of houses, brand new cars, and
other valuable prizes in the ongoing promotion across various cities
such as Lagos, Ijebu Ode, Ibadan, Benin, Enugu, Port Harcourt, Warri and
Jos.

Senator Kilawangs extolled Globacom for being so transparent in conducting the promo, adding that “there are so many companies in Nigeria, but Glo has shown it is second to none in CSR. What I feel inside of me is beyond what I can express”.

On his part, Mr Igho noted that: “Glo has stood up as a true Nigerian
champion. I commend the company for putting a roof over the heads of so
many Nigerians and for the other fantastic prizes too.”